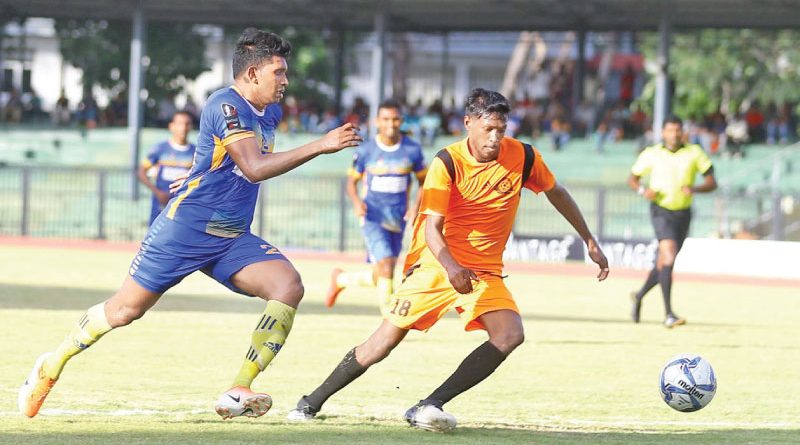 After a scoreless full time, the game went into tie breaker, where Ashfaq Ayub was instrumental in saving four penalty kicks while displaying some sensational goal keeping skills to enable them to notch up a convincing win, assuring them a place in the semifinals next Thursday.

The Java Lane lads held the upper hand on the game from the start whistle and dominated the entire first half.

They were quite dangerous in loose play and made some teasing moves, which were well defended and equally saved by the rival goalie M.S.R. Jayasekara. While their strikers were dominating their backs were equally into the task.

They executed a solid defense wall depriving the opponent’s players surging ahead. On the other hand, the high riding Defenders SC had an off day on the field. Due to their play makers were well marked by the rival’s players and they found it difficult make some penetrative moves to make inroads.

In the 34th minute of the first half L.C.S.K. Mendis’s almost scored a goal for them through a 30 meter left footed kick which just brushed aside the opponent goal crossbar went to the dead area of the ground.

The situation remained unchanged as both teams went for lemons without a scoreless first half.

After the turn around both teams changed tactics. Defenders intended to play an offensive game of football while imposing enormous pressure on their rivals.

The first 25 minutes of the first half was dominated by them, hunting for a scoring opportunity, which ultimately became an uphill task.

Java Lane lads stormed into the game in the last 15 minutes, after missing scoring on five occasions. After some anxious moments both teams failed to make an impact on the score line as the game ended nil all by the full time, resulting in judging the winner by a penalty shootout.