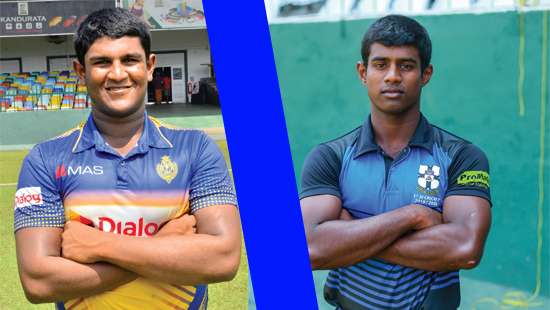 The 141st edition of the second oldest schools cricket encounter in the world, the Battle of the Blues, between Royal College Colombo and S. Thomas’ College Mount Lavinia will get underway at the SSC ground in Colombo tomorrow.

On the balance of this season’s results, both teams are equally matched with four outright wins each, but the Royalists have had to contend without the services of two of their key players, Ahan Wickramasinghe and Kamil Mishara, who spent much of the season on national duty with the Under 19 team.

The Thomians won the encounter for the 35th time last year under the leadership of Sithara Hapuhinna equaling Royal’s tally of wins and despite having lost some of the players from last season, will push for a rare back-to-back win.

“We won the big match last year, however Royal College have a strong side this season. We would be playing positive cricket, and push for a result,” said head coach of S. Thomas’ cricket Dinesh Kumarasinghe, who himself represented the Thomians with distinction in the 1986 and 1987 seasons.

Interestingly, the Thomians’ long standing coach was in the same role when the current Royal head coach Jehan Mubarak represented his school in three battles.

Mubarak said that the focus will be on playing good cricket in what will surely be a high-pressure game for the youngsters of both schools.

“The team is strong this year, especially with Ahan (Wickramasinghe) and Kamil (Mishara) returning. We have been playing good cricket this season, and our focus will remain on playing good cricket, and letting the result handle itself,” former Test cricketer Mubarak, who represented Royal in three encounters between 1997 and 2000 missing the 1999 encounter while on national Under 19 duty, said.

Thevin Eriyagama will lead the Thomians this year and will be an important part of his team’s bowling attack that includes all-rounder Dilmin Ratnayake, their top wicket-taker this season with 64 scalps, and Sri Lanka youth player Yasiru Rodrigo (38).

The Thomian batting meanwhile will revolve around Ravindu Rasantha, who was the second highest run-scorer at the Under 19 World Cup earlier this year, and was the only Sri Lankan to score a century and also make the ICC team of the tournament.

He will have the support of Ryan Fernando, who has been among the leading scorers for the Thomians this season with 564 runs, along with Maneesha Rupasinghe (544 runs), Umayanga Suwaris (513), Gavin Boteju (407), Shalin de Mel (466) and Ratnayake who will form a middle-order whose temperament will likely have a bearing on the final outcome of the game.

Royal captain Thevindu Senaratne will bank heavily on Wickramasinghe and Mishara, with the latter showing good form on his return from national duty, scoring centuries against Isipathana College and Wesley College and taking his season tally to over 600 runs.

Senarathna has the potential to score a big innings, which has been long overdue this season and this could be the occasion for him to stamp his mark.

Wickramasinghe, despite representing Royal in only a handful of matches, has accumulated 425 runs, including a century against Prince of Wales and an aggressive blitz against Trinity College scoring 97 in just 27 balls.

The Royalists will also have the quality of Kavindu Madarasinghe in their ranks, a double centurion against Trinity College who has over 500 runs this season, with Isiwara Dissanayake (485 runs) also part of a strong batting line up.

Royal also have formidable threats in their bowling attack, with spinners Gishan Balasuriya and Prashan Kalhara having shared 115 wickets between them, supplemented by pacies Kavindu Pathiratna and Lahiru Madusanka.

Royal’s win in the 2016 came under the leadership of Geeshanth Panditharatne.