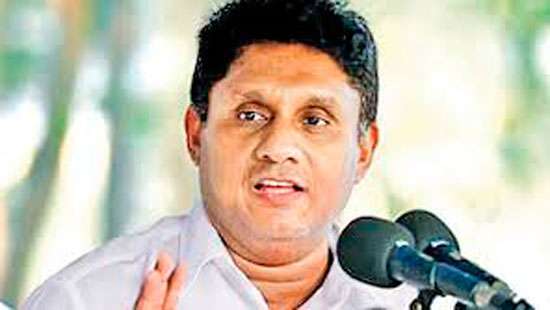 The Coronavirus has no relevance to the general election as preventing the further spread of the disease is the most important matter rather than talking of postponing the polls, Samagi Jana Balawegaya (SJB) Leader Sajith Premadasa said yesterday.

Mr. Premadasa said one must only focus on humanitarian work to prevent the spread of disease and to minimize the effect it has on the economy.

“Talking of postponing election is not relevant as what has to be focus on delivering the country from this disaster,” Mr. Premadasa said.

“Sri Lanka has begun to feel the disaster more with the detection of first patient, while the matter was of a great concern for the whole world much earlier. He said it has become a globalised issue, as there are 113,702 patients reported globally, while 4012 people had died of it, according to the data released by World Health Organization (WHO),” he added.

“The government took things lightly when I questioned about the disease in Parliament five months ago,” he said.

Mr. Premadasa meanwhile alleged that Sri Lanka is not following the WHO standards on preventing the spread of disease. Also he said the Sri Lankan expatriate workers are subject to harsh treatment when they arrive at Bandaranaike International Airport.

Meanwhile, former MP Dr. Harsha de Silva said Sri Lanka should be prepared to face anything with regard to coronavirus, including the postponement of the general election if things spill out of control.

“There is no need to panic at the moment, but it is be better to be prepared” he said.

At the same time, Dr. de Silva said coronavirus is a global crisis and considered the biggest in the world since the world war two.

He said the government took effective steps initially to prevent the disease from spreading. But the situation seemed to changing now. “One cannot understand the logic behind subjecting only Sri Lankans coming from abroad for quarantine, while expatriates including the Chinese are allowed to come into the country safely,” he said.

Also he said one has to be watchful of the economic crisis as well including the crashing of Colombo Stock Market, foreign investors pulling out of financial markets and devaluation of the rupee. “Government should make use of the Asset and Liability Management Act to pull the country from the financial crisis” he added.