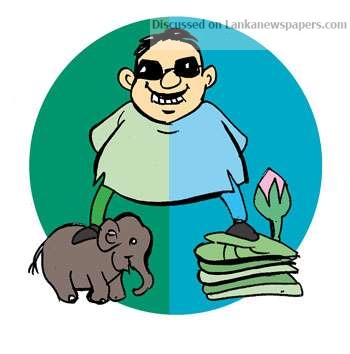 A Diyawanna politico representing an electorate in Harasiyapattu is reportedly busy ingratiating himself with both leaders of a splintered political alliance in a bid to secure nomination either of them to contest the upcoming general polls.

This politico known to have had taken a rigid anti-Pohottuwa stance during the last local polls has now put on display a large cutout of the Pohottuwa leader in front of his political office in his home turf, they say.
However, the politico is said to be warming his way into the graces of the ‘compassionate’ leader of the other faction of the splintered alliance as well, in case he fails to get nomination from Pohottuwa. People in his area have nicknamed this politico after a mammal flitting from tree to tree in the night, they say.