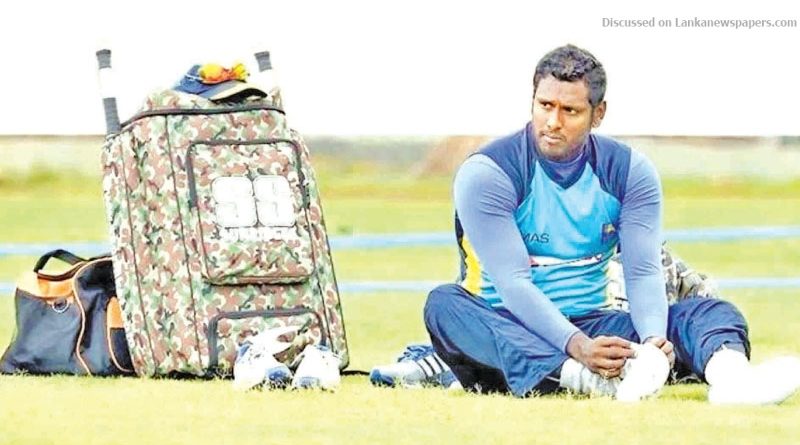 Sri Lanka’s experienced one-day cricketer Angelo Mathews’ place in Sri Lanka’s 2019 World Cup squad could be in jeopardy unless he proves his fitness.

The 12th edition of cricket’s mega event is scheduled to take place from the end of May in England.

Mathews whose career has been plagued by injuries especially below the waist limped off the field while batting in the second innings of the second Test against New Zealand at Christchurch which Sri Lanka were trying to save with a hamstring injury which was later put down to a grade two strain. He is expected to be out of action for about four weeks which effectively rules him out of the four one-day matches (3 ODIs and 1 T20I v New Zealand) and the two Tests against Australia later this month.

“What I can’t understand is watching him taking that run I couldn’t imagine that you can pull a muscle running at that speed. He was basically just trotting. Just to trot and to pull a second degree hamstring there must be something literally wrong,” said chairman of cricket selectors Ashantha de Mel.

“They should send him to Australia or somewhere and get his injury sorted out. He has to be fit. We can’t be molly-coddling players. If he can’t run and field it will be difficult for him to play one-day cricket. Test cricket you can hide but in ODI cricket you can’t run singles slowly. He will have to really get himself fit if he wants to play one-day cricket otherwise it is impossible for him to play,” he said.

“How can you pick a player who cannot field in the outfield and who can’t run between the wickets fast. You can be a good batsman. In a Test match you can manage because it’s a slow-paced game and nobody will criticise you if you run only two when there is three. But in the one-day game the ones and twos can be the difference between winning and losing a match. We have to really assess his fitness. Unless he is 100 percent fit I don’t think we can select him for one-day cricket.”

De Mel however added that Mathews could keep his place in the Test team solely as a middle-order batsman.

“What Mathews should do in Test cricket is to forget his bowling and be a no. 5 batsman. He is scoring runs and in this series (v New Zealand) he was three times not out and averaged over 200,” said De Mel.

“If he can score those kinds of runs without bowling he is valuable to the team. In fielding he must field more in the slips without running around. Some sort of protection must be given to make use of his batting,” he added.

In November Mathews was axed from the limited-overs squad against England over fitness and run-out issues, but was later recalled to the one-day side against New Zealand.