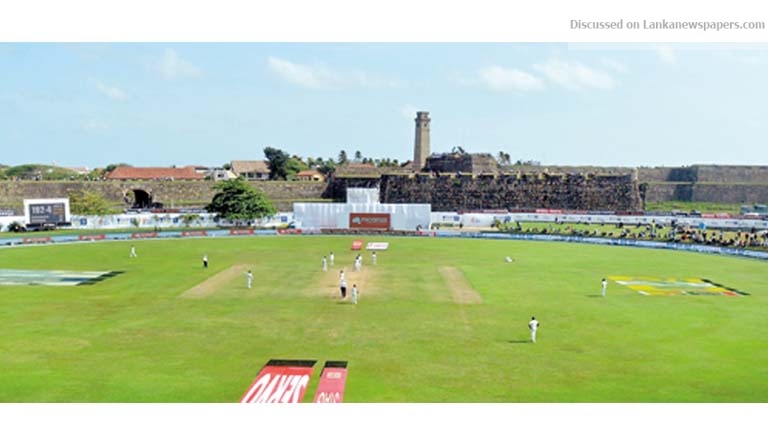 Citing UNESCO requirements that do not exist, the Government decided this week to demolish the pavilions at the historic Galle International Cricket Stadium and to relocate the venue elsewhere.

Government representatives at a recent meeting resolved to demolish the “intrusive” constructions and to set aside land in Pinnaduwa for a new cricket stadium. Among them were four ministers: Vajira Abeywardena and Sagala Ratnayake from the Southern Province, Sports Minister Faiszer Musthapha and Cultural Affairs Minister Wijeyadasa Rajapakse.

The decision will shock hundreds of thousands of sporting fans who want both the cricket ground and historic Galle Fort to be protected in the same vein, given the significance of both properties.

The Galle Cricket Stadium, used for horse racing under British colonial rule, was officially declared a cricketing venue in 1927. In 1998, it was baptized as a Test venue when Sri Lanka hosted New Zealand but suffered extensive damages in the 2004 tsunami.

UNESCO has never requested the Government to shift the venue, authoritative sources confirmed. Nor have they called for a demolition of the main Mahinda Rajapaksa Pavilion, rebuilt in 2007 for millions of rupees following destruction due to the tsunami.

The UN’s cultural agency has only recommended the removal of certain obstructions impacting upon “the physical and visual integrity of the 17th Century Galle Fort”. And the International Council on Monuments and Sites (ICOMOS), from which UNESCO derives guidance, has clearly recommended “not to press for the demolition or alteration” of the pavilion.

In fact, the most recent ICOMOS report released in 2016 has even suggested how the issue could be resolved. It offered a pragmatic way forward, including acknowledgment from all relevant authorities that the new Mahinda Rajapaksa Pavilion was not erected in accordance with relevant approvals. But it recommended not to press for its demolition on the basis that new procedures and protocol, when established, will prevent similar impacts in the future.

“It would be appropriate for both parties to acknowledge the status of the other,” states the report by Michael Morrison, Member of Britain’s Institute of Historic Building Conservation and the country’s representative in ICOMOS. “There is cultural heritage significance of the cricket ground as well as a good deal of popular support for the game and the Galle Heritage Foundation and other authorities should acknowledge this. However, this is a lesser significance than the status of the World Heritage property”.

Other ICOMOS recommendations include setting time frames to demolish of the semi-derelict “indoor net building”, removing all other temporary structures on the edge of the pitch area; and acknowledging that the present buildings will remain for now until the time comes to alter or renew them. There is no requirement to demolish any of the pavilions (there are three), leave alone relocate the stadium.

Secretary General of the UNESCO Commission Sri Lanka Lal Ratnaweera admitted that there’s no requirement to demolish the stadium. “There’s no reason to shift the venue,” he said. “But there are few illegal constructions which obstructs the visible integrity of the Fort and these needs to be removed.”

UNESCO has given December a 2019 deadline to make those necessary changes to minimize the visual impact on the ramparts, Mr Ratnaweera said.

“It’s a long and gradual process,” said Mr. Ratnaweera. “There’s no restriction to play cricket in the ground and, in fact, we all agreed that matches should be played at the venue as scheduled”.

Sri Lanka’s next assignment at the venue is the first Test between England and Sri Lanka and Mr Ratnaweera said the match can go ahead as scheduled.

Sri Lanka Cricket (SLC), which is under the Ministry of Sports, is yet to make an official comment on the new development but confirmed the England-Sri Lanka opener will be played as scheduled.

The Galle Cricket Stadium was reconstructed in 2007 with funds collected through charity. This facelift did not go down well with UNESCO. Despite repeated cautioning by the UN cultural body and the Galle Heritage Foundation, the self-proclaimed godfather of the venue, Jayananda Warnaweera, erected buildings without paying heed to existing laws governing World Heritage Sites. He even named the main pavilion for Mahinda Rajapaksa, the then President, who gave political backing.

UNESCO then urged the demolition of some unauthorised structures within the stadium to protect the visual and physical integrity of the Galle Fort. It suggested that makeshift facilities be put up, as and when required, to host international matches.

Extensive inquiries by the Sunday Times confirmed that the recent decision is socially and politically motivated. Just as the constructions at the cricket stadium has had a cultural impact on the Fort, the venue poses social issues to area residents, claimed Tharanga Liyanarachchi, Project Officer from the Galle Heritage Foundation.

“This was a public ground for many years,” he said. “It is now fenced off for 360 days to play just five days of cricket. We want this place to be opened for public.”

This position, however, has no basis in fact. While the venue does host an average of two Test matches a year, it is widely used for domestic cricket matches including school cricket. It has played a significant role in the development of cricket in the Southern Province.

The constructions are within the 500m buffer zone of the World Heritage Site,  Liyanarachchi also pointed out. The Galle Municipal Council, who owns the property, admitted that SLC may have flouted certain building approval conditions—including the requirement to obtain permission from the Cultural Ministry and the Galle Heritage Foundation. But no demolition will be permitted without a court order, he insisted.

“We have given building approval subject to certain conditions which may have not been adhered to when constructing these buildings,” said Galle Mayor Priyantha Sahabandu . “But that doesn’t permit anyone to bring them down.”

Meanwhile, Urban Development Authority (UDA) sources said they will press for legal action with regard to the unauthorised buildings.

Several former cricketers have now banded together to urge the authorities to reconsider the decision to take down the Galle Cricket Stadium. “This is sad! Galle cricket ground has a unique place in international test cricket history for its location. Also one of the most successful venues for the national team. I would like to plead and humbly request authorities and Sri Lanka Government to reconsider their decision,” wrote former Sri Lanka skipper Mahela Jayawardene on Twitter.

Arjuna Ranatunga, the World Cup winning skipper, said there must be a programme to protect both the World Heritage Site and the Galle Stadium as they had equal importance to the country.