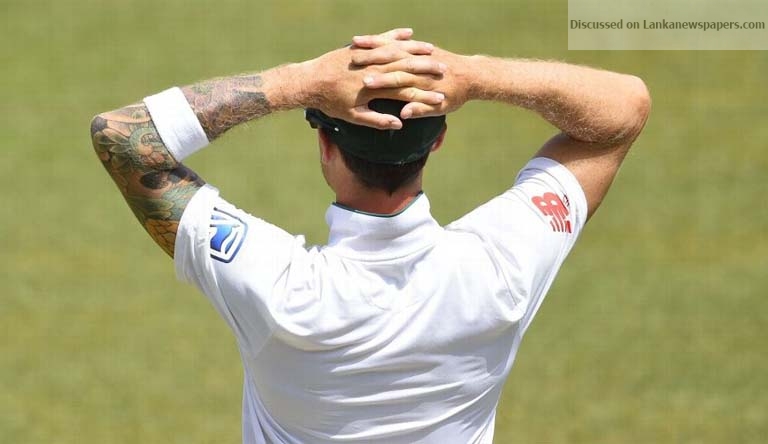 South Africa need to rethink their approach to touring the subcontinent, after a second successive series defeat in Asia, according to captain Faf du Plessis. After being defeated 3-0 in India in late 2015 and now 2-0 in Sri Lanka, du Plessis acknowledged that South Africa need to address both their attitude to using spin bowlers and their ability to play spin if they hope to be successful on slow surfaces in the future.

“Our way of coming to the subcontinent needs to adapt,” du Plessis said. “Whether it’s playing two or even three spinners, when you come to conditions like this you give yourself the best opportunity.”

South Africa had three spinners in their squad but chose to go into the must-win second Test at the SSC with just one. After the second day, Ottis Gibson said it was “not the best decision we’ve ever made”, and in the aftermath du Plessis also conceded the error. “We unfortunately made a mistake in playing the three seamers that we did. Our expectation was that the ball would reverse. And in both Test matches we saw that reverse-swing didn’t play a role.”

Perhaps there was some justification for South Africa’s assumption that the seamers could do the job. In Galle four years ago, Dale Steyn bowled South Africa to what became a series-winning victory, albeit marred by an incident of ball-tampering from the triumphant side.

On this tour, Steyn, making a comeback after six months on the sidelines recovering from a heel injury, was unable to repeat those feats, or even take the three wickets he needed to overtake Shaun Pollock as South Africa’s leading wicket-taker.

Steyn managed two wickets in Galle but had no rewards in Colombo, going wicketless for only the fourth time in his career. Rather than that being a slight on him, it is reflective of the difficulties all of South Africa’s seamers faced. Collectively, they took 12 of the 25 Sri Lankan wickets that fell in the series, Kagiso Rabada leading the pack with eight.

“It was frustrating for Dale because he gives everything. He was running in but there was nothing happening for him. There was no reverse from the wicket,” du Plessis said. “I think it would be unfair to judge our seam bowlers on these performances. They tried hard, but it was just really tough to get something out of the wicket. The wicket was quite dusty. You saw with a lot of balls that when it hit there was a little bit of explosion. That takes out all the pace out of the delivery. Our pace factor that we had as a threat was not a weapon in these conditions.”

But analysing the series loss from the perspective of the bowlers would fail to address the main issue South Africa grappled with across the two matches: how to play spin. Their line-up, not reputed for its ability against spin, was exposed for inability to read what Sri Lanka’s bowlers were doing and their subsequent indecision over whether to play for turn or not. While du Plessis rightly pointed out that South Africa are not the only side to lose their trial by spin, he also explained that they will only be able to properly prepare for subcontinent tours when they are able to replicate those conditions at home.

“It’s a global issue. Whenever a team tours the subcontinent – whether it’s Australia or England or us – there’s always a question mark on how you play spin. It’s a world issue that we’re trying to get better at,” he said. “I don’t think we play spin badly, but if you compare yourself to the subcontinent batters, then they’re obviously a step above us in that regard.

“It has to be a case of looking at how you can get your own home conditions to try and get exposed to these kinds of conditions a little more often, when you’re playing first-class cricket. That’s where the challenge lies for the South Africas and the Englands and the Australias of the world.”

But the surfaces used in South Africa’s domestic competitions simply cannot produce the same kind of turn that is available on the subcontinent. In some years, pitches are too flat, but mostly, there is pace and bounce available. And when South Africa play international cricket, they want to make use of those favourable qualities on their own grounds. Naturally.

Sri Lanka are due to tour South Africa in February-March next year and will play two Tests in Durban and Port Elizabeth. Those two venues are not among the quicker, bouncier ones in the country, and St George’s Park has been known to take turn, but South Africa will still want to blunt the spin factor so they can play to their strengths. “Teams these days make sure they can maximise their opportunity to win a game,” du Plessis said. “For us, it will be similar to last time when they came over.. We’ve got a really good seam attack so the pitches will have some pace and bounce.”

While that will likely ensure South Africa can exact their revenge for this series defeat, it will not do anything to prepare them for their next trip to the subcontinent, to India next October. Instead, it may only increase the batsmen’s reliability on familiar conditions in order to score runs.

So, if South Africa really want to rethink their approach to playing the subcontinent, it may have to start with them trying to neutralise their own home conditions against subcontinental sides for international fixtures. Then, they can face top quality spin in challenging circumstances, even if does not guarantee them relatively straightforward wins.