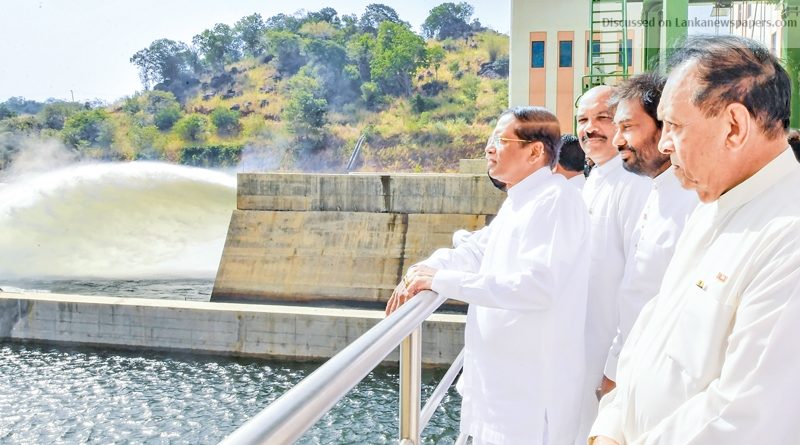 The Moragahakanda- Kalu Ganga project will spur a massive development drive to rejuvenate the country’s agricultural hinterland, President Maithripala Sirisena declared in Laggala yesterday, presiding over the water filling ceremony of the Kalu Ganga reservoir. “Today is the happiest day in my life,” said President Sirisena, adding that the water scarcity faced by the Rajarata inhabitants will now be a thing of the past. “Someone could ask me whether the day I became President was not the happiest day in my life.

On that I felt a sense of duty to the Motherland, but this is undoubtedly the happiest occasion.” Noting the project would herald in a “new chapter” in the country’s agri-based economy, the President told the large gathering that the water filling ceremony will mark a giant leap forward in irrigation, with the entire project adding a value amounting Rs 200,000 million to the national economy.

Moragahakanda and Kalu Ganga is not an isolated project as it will be followed by several other irrigation and hydropower projects such as giant canal systems, Upper Elahera Ela and a few others.

Moreover, the scheme will be a feeder source for more than 2,000 tanks to provide water for thousands of acres of paddy and other cultivations.

The President said the Moragahakanda and Kalu Ganga reservoir development scheme is a permanent solution to wipe away the tears of the Rajarata people, who were affected by an acute scarcity of water for decades as there was no proper irrigation system.

Her recalled that even though he commenced the project on January 25, 2007 as the then Mahaweli Development Minister, former President Mahinda Rajapaksa did not give any support or assistance to carry out the project.

He made an untiring effort to seek funds, but was not allocated even a cent for the project. As a result of that, the project was stagnating for five years. Even five years after laying the foundation, it could not be started. It was scheduled to release water for irrigation in 2012 – 2013 if the project went ahead as planned.

The President said that however certain persons are now trying to be the “fathers” of this project but they did not give any support even by word when he made efforts to make the project a success.

“As a gratitude for the late engineer Dr. A.N.S. Kulasinghe, I came to see this place in 1994. But those who want to be fathers of the project were not there. These persons did not add the project even to the list of the Foreign Resources Department of Foreign Ministry.”

The President said that it a major reason for his crossing over and becoming the common candidate in January 2015.

The President pointed out that Sri Lanka has inherited a sound irrigation system and a unique hydro culture, which is not second to any in the world. As a result of these sound technological methods of our ancestors in the field of irrigation this giant scheme will also be a historic achievement. The President while thanking to the people who sacrificed their lands for the project said that they have made a unique contribution to the country and to strengthen country’s economy. It will be a tremendous boost for the government’s effort to obtain sustainability in various sectors, including the agriculture sector. He said that as a result of the cordial ties the country maintains with the world several countries and organisations came forward to assist the project. Accordingly, countries like Japan, China, Saudi Arabia, Kuwait and organisations such as ADB assisted the project.

President Sirisena speaking on the media said that the media should be impartial and must always bring the correct picture to society than trying the fabricated picture among people while acting with their hidden agendas.

The President noted that under his governance media freedom was established.

“When you watch or listen to certain private electronic media some can think whether there is no Government in the county. I must ask the heads of these media institutions whether they want to bring the dark era of media freedom again. If such a period comes you must repent,” the President said.

The Moragahakanda project completed at US$ 1,150 million will end the water scarcity in several districts including Matale, Polonnaruwa, Vavuniya and Anuradhapura. The Rajarata channel system is 102 km long and will connect to the Mahakanadarawa Tank via Huruluwewa. The construction of the 96 km long Wayamba Channel system will commence in February.

The project cost of US$ 200 million has already been allocated. Both channel systems will supply water to 1,500 small tanks in the Dry Zone. Upon completion of the two channel systems, around 94,000 hectares of paddy land can be cultivated throughout the year.

Apart from providing water for agriculture purposes, the project will provide drinking water to millions in the dry zone who are severely affected by health issues such as kidney disease.

The project will also add 25 Megawatts to the National Grid through the power house attached to the main dam of Moragahakanda.

Parallel to the water filling ceremony, the construction of the Moragahakanda – Kalu Ganga tunnel, which links the two reservoirs to each other will commence.