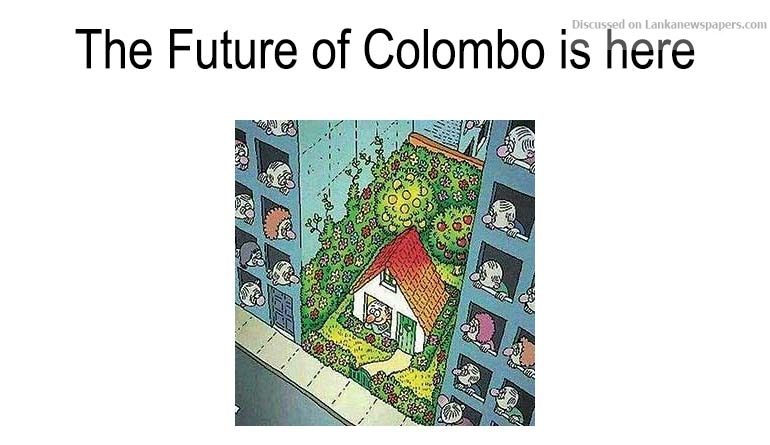 In 1962 when Lee Kuan Yew visited Ceylon, he was coming from a war torn land. He immediately fell in love with the human scale and the large trees he saw as a landscaped back drop to two or three storied buildings located in deep gardens set far back from the street. The streets he saw were clean and the people friendly. He so wanted his new Singapore to be like Colombo.

But he was in for a surprise, for when the debris was cleared he did not have as much space in his city. The inexperienced planners employed by the then URA Singapore, hurriedly demolished many of the historic quarters, without understanding their value as essential cityscapes and cultural landscapes, to create the housing that was urgently required to generate affordable living standards for his people. The units were basic but sufficient. In the process most of the historic patrimony characteristic of Singapore was destroyed and replaced with mundane housing schemes. But he wanted trees planted along his streets like what he saw in Colombo. This was looked into, provision made and implemented most efficiently.

Till about 2008, Colombo had a unique human scale that made it very special and so different from the average Asian City. The City had managed to control the usual blight of rural urban migration, which was assisted by Sri Lanka’s earlier enlightened policy of good health services and education facilities around the country. Colombo still had the vestiges of a Garden City and it only needed a minisqual visionary input to raise it to this unique and exceptional status.

Soon after the end of the thirty year terrorist war, some of the early efforts to remove the barricades and undo and demolish the self-inflicted fortification walls, built by past directors of government institutions to safeguard their domains, revealed a hidden treasure of vintage vehicles and heavy machinery now corroding and gradually sinking unseen into the landscape. With the removal of this junk one was suddenly exposed to the large spaces available and even to a special colonial building typology. The tree growth that was previously stifled by steel machines now saw a new freedom and began to smile again.

All was fine except for one oversight that was pointed out, but not voluntarily accepted. This was the prerequisite to obliviate the heat soak being created by the many miles of concrete paving, and at times tarmac being introduced as pavements along all the roads in the city and throughout the park lands. The tree roots are now shut off from any moisture or is unable to absorb rain water due to the paving. It seems as though a purposeful effort had been made to stifle the root system and to gradually kill the large trees that had stood as sentinels along the road side for a century or more. All one had to do to decrease the heat soak is to plant more trees to create shade along the pathways and leave bare spaces to warrant the root systems to absorb moisture . But who will do it? none heeded.

Sri Lankans were now travelling again, the war had come to an end, they saw and were enamoured by the soap opera architecture being unfolded in cities like Singapore and Dubai, creations based on borrowed or adopted cultures. Being great imitators, we needed to copy the worst that is on show abroad and bring it to Sri Lanka. In the past only the best was assimilated the rest was spat out like a Bulath Hape. Here even the Hape was swallowed.

The post 1977 liberalisation policy destroyed entrepreneurship in Sri Lanka. The only real survivors being the porcelain crockery industry. Unlike in India that supported, enhanced, buttressed by a large local population, to develop the Tata-s, Birla’s, the Godridge-s, the list is endless. These Indian companies with over decades of hard work have become international and are able to stand on their own feet against any competition.

Sri Lanka instead, has become a country of cheap goods expensively traded, and traders and corrupt wheeler dealers. All interested only in a fast buck. All the agencies that were built up over decades of sweat and enjoyed previously by Sri Lankans have been taken over by some non-entity in Mumbai and there has not been a whisper. We have already lost our virginity, we are now embarking on big time prostitution, male and female, with the signing of agreements like the ECTA and similar documents that were hurriedly signed with numerous countries, recently. This would create a virtual diseased, drug resistant red-light district of the whole of Sri Lanka

This aggressively advertised trading attitude is seen, even in the real estate market. Sites that previously contained one house and one car, through ‘development’ trading is converting to forty or more apartments with forty or more cars all spilling out on to the same street adding to the congestion on the road. Some are venturing higher as they want to be more visible and collect extra profit, adding more vehicles and pressure on to the already congested roads and poor infrastructure. The lack of a proper sewerage disposal system, lack of sufficient pressure in the water hydrants. An electrical system that peaks at much less than 230 volts that forces each complex to have a transformer. Added to that, a fire brigade that will not be able to cope with any serious emergency due to the lack of proper equipment and an inability to get through due to traffic congestion, speaks miles for our infrastructural development.

An over-burdened garbage system with a cowardly conviction that all garbage generated in Colombo should be loaded on to another’s back yard, instead of having the mettle to make it Colombo’s own responsibility and to find solutions within Colombo for the garbage that Colombo generates, is only postponing the event.

The freedom and need to live in your own castle with our feet on the magical earth, seems strange to the Statutory Authorities, as medium and high rise buildings are considered as infill developments that could be located anywhere in the city. This is not based on any carefully worked out urban planning principle, that infact should limit buildings to a maximum development height of six to ten floors with proper setbacks, to maintain and enhance the human streetscape or a sophisticated infrastructural concept. There are regulations, unfortunately in this jungle regulations are frequently changed to accommodate political whims and the loudest and the deepest pocket wins.

The beginning of the end of the visual destruction of the Beautiful Garden City of Colombo began six years ago and within the next five years, Colombo would easily be designated the least planned, with the poorest infrastructure and be a worthy contender for the converted trophy for the ugliest city in South East Asia.

And the trophy goes to ….