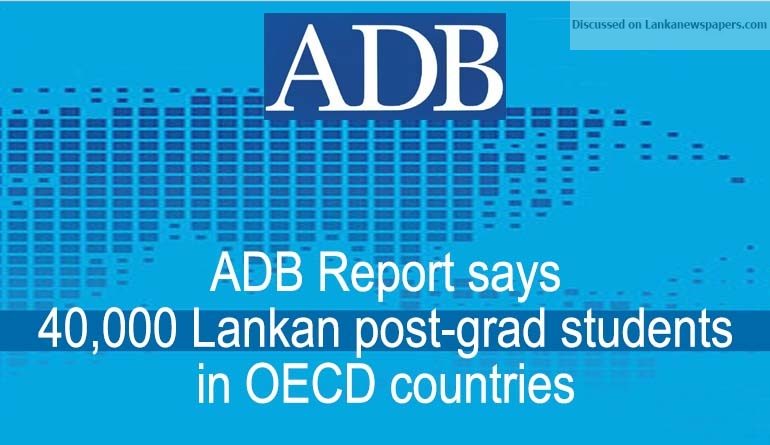 There were 40,000 Sri Lankan graduates, reading either for a Doctor of Philosophy or Master’s degree in the Organization of Economic Cooperation and Development (OECD) countries in 2015, the Asian Development Bank (ADB) in a report released last month said.
The ADB further said that of Sri Lanka’s total remittances inflows of US$ 7.3 billion in 2016, the Gulf Cooperation Council (GCC) countries accounted for 50.6 per cent of those inflows, followed by the OECD (38.5 per cent) and ‘others’ (8.5 per cent),  the report said.
Remittances are Sri Lanka’s single largest foreign exchange earner.  It further said that of Sri Lanka’s migrant labour, 35 per cent were women.
The ADB added that there were 208,000 Sri Lankans who flew to work in the GCC in 2016 while the island’s diaspora population numbered 1.64 million in 2015. Of this number, those in the OECD, in the years 2010-11 accounted for 579,000; the study said. It further said that Sri Lanka’s total migrant outflow in 2016 of 243,000, the majority flew to the GCC, of which the leading intake was Saudi Arabia.
Saudi took in 63,000 of Sri Lanka’s 208,000 labour inflows to the GCC in 2016, followed by Qatar (60,000).  The ADB also said that apart from the OECD and the GCC, there were 4,770 Sri Lankan migrant workers in Malaysia and Singapore in 2016.
The OECD is comprised of the United States of America, Korea, Japan, Germany, Canada, the United Kingdom, Australia, Italy, New Zealand, Austria, Spain, France, the Netherlands, Belgium and Sweden.
The GCC is comprised of Saudi Arabia, the United Arab Emirates, Qatar, Oman, Kuwait and Bahrain.