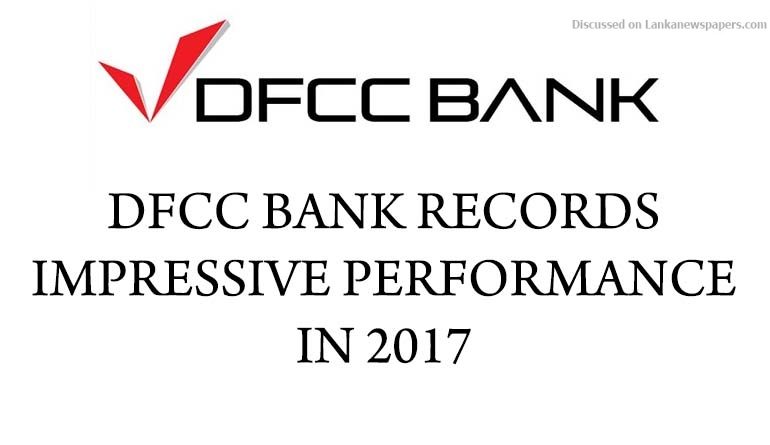 DFCC Bank continued to demonstrate positive momentum across businesses in 2017 as a rapidly growing commercial bank completing its second year after the amalgamation.

Chairman Royle Jansz said, “The fundamentals have been put in place for stable, sustainable growth and the bank has set itself a challenging target over the next three years. Good corporate governance is a cornerstone of the bank’s policy and governance has been strengthened. The bank recognises that our people are our greatest asset, and during the year under review, many initiatives to increase the skills and competence of the staff have been put in place, while ensuring they are well compensated, excellence rewarded, and talent recognised.”

Commenting on the Bank’s performance CEO Lakshman Silva , DFCC Bank stated, “DFCC’s future outlook is positive as the Bank’s growth drivers are delivering results. The Bank’s key focus areas are enhancing operational efficiencies, strategic investments, notably in technology, IT systems and solutions and increasing our penetration into markets across the country.

A mix of complementary strategies will be employed to reach the set objectives and the Bank will explore a range of opportunities in consolidation and offshore marketing leveraging on its Group relationships”.

It was a year in which DFCC excelled due to the mix of complementary strategies that were employed.

The upward trend in key numbers are especially noteworthy.

The Bank’s deposit base reported a substantial increase of 38% from LKR 140,514 million in 2016 to LKR 193,308 million in December 2017. The Bank’s low cost deposits (CASA) ratio increased to 21.3% from 20.2% in 2016. This was aided by a successful drive to increase the current and savings base in the retail banking space with a range of innovative products and services, an aggressive sales force and an expansion of delivery channels which contributed to enhanced business volumes.

During the year, the Bank relocated many branches to more customer friendly locations with enhanced facilities.

The Bank’s CASA deposits increased by LKR 9.4 Bn during the fourth quarter whilst the Bank continued to enjoy long term concessionary credit lines which improved the ratio from 21.3% to 30.1% as at December 2017.The Net loss from financial instruments at fair value through profit and loss from other operating income increased mainly due to the marked to market impact and volume increase in foreign currency swaps year-on-year, which is managed through the higher interest income from increased lending of advances funded through swaps.

The Bank’s impairment charge has increased by LKR 239 million (26%) over the previous year mainly due to the growth in loan portfolio. The Bank’s non-performing advances (NPA) ratio as at 31st December 2017 improved to 2.77% compared to 2.97% in December 2016. Due to the prudent recovery processes implemented and close monitoring, the Bank has been able to contain the build-up of non performing advances.

The incremental cost that had to be incurred for above business growth contributed to a 15% increase in operating expenses which were a result of the amalgamation synergies required for investments in people, IT and branch expansion. Careful monitoring and effective cost control measures adopted along with additional revenues generated during the year helped the Bank to record a lower cost to income ratio of 41.1% in 2017 compared to 44.7% in the previous year.