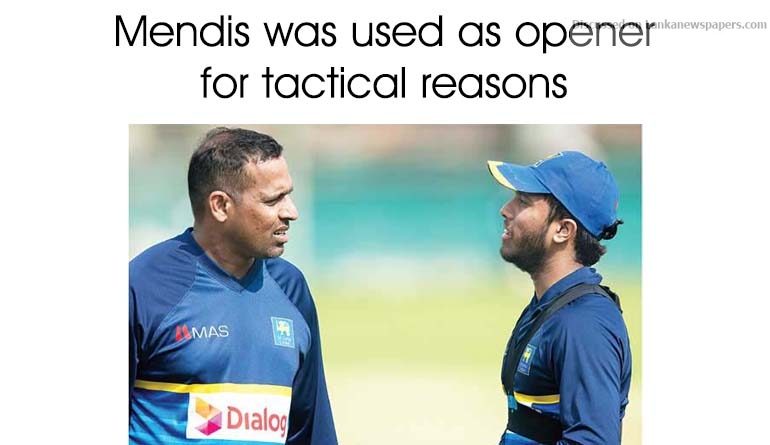 Sri Lanka’s Batting Coach Tilan Samaraweera shedding light into the decision to open the batting with young Kusal Mendis during the just concluded tour of Bangladesh said that it was more a tactical decision and wasn’t sure whether Sri Lanka would stick to the same strategy moving forward.

The 23-year-old, who was dropped for the tour of India, was making a comeback in Bangladesh and there were concerns when the added responsibility was thrust upon him. But he delivered posting a career best 196 in the first Test in Chittagong before hitting back to back half-centuries in T-20s, an effort that won him the Player of the Series award.

“I am not sure whether Kusal Mendis will continue to remain an opener in the future. The reason why we used him as an opening batsman was because we knew that Bangladesh will depend heavily on spin bowling. The Head Coach had a chat with Mendis. I feel that Mendis is one of the top three players in the country in playing spin. So he was used as an opener due to tactical reasons. We believed in him and he delivered,” Samaraweera told The Island after arriving in Colombo.

Samaraweera also said that he had been ironing out a few gray areas in Mendis’ batting. “We changed a few technical things like bringing his backlift higher. If you analyze, his gloves were being placed between his hip and knees. What we did was to bring that a bit higher when playing fast bowlers. He was comfortable with it as well. But more than technical stuff, we tried to work on his mental stuff,” explained Samaraweera.

Another player who did exceptionally well was Roshen Silva, who was Player of the Series in the Tests. Silva posted a maiden Test hundred in Chittagong and came up with twin half-centuries in Dhaka on a wicket where all batsmen struggled. “I believed around 2015 that he could play Test cricket. He is mentally very strong. He has been playing First Class cricket for over ten years and he has experience of playing in England and stuff like that. West Indies series is coming up and we know that two players who are injured will make a comeback to the side and the competition will be extremely high for places for that series,” Samaraweera felt.

Sri Lanka finished the tour of Bangladesh in flying colours having won the tri-nation tournament, Test series and the T-20s. “The dressing room is very much relaxed. It happens when you win matches. Hatu believes in keeping the dressing room calm. You have enough pressure out in the middle and he wants to keep the dressing room calm. I thought we communicated well on what we expect from players. One of the other things that we observed was that physically we put in lot of effort, but mentally we were not all there. That is something that we worked on.”

Samaraweera also thanked the ground staff at R. Premadasa Stadium, who helped the team prepare well during the training camp in Colombo before undertaking the tour. “We would like to thank the ground staff at Khettarama for providing us all what we asked for. We wanted to train on turning wickets and we also opted for wickets with about three millimeters of grass as we weren’t quite sure what to expect in Bangladesh. That was all given to us. Special thanks to Godfrey Dabare and Asanka Herath. We always speak about players and coaching staff but not people who do the work behind the scenes.”