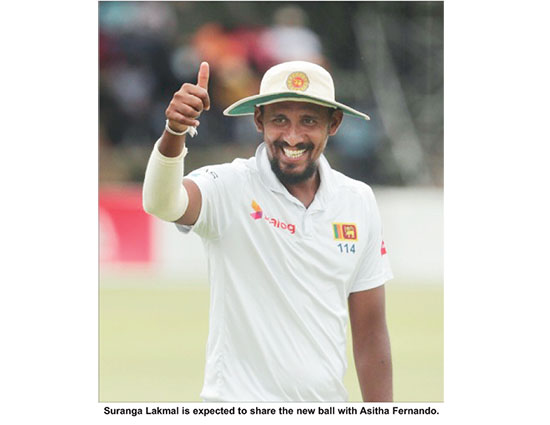 Sri Lanka’s card game heroes Suranga Lakmal and Oshada Fernando are expected to make a return to the side for the second Test against England that gets underway at the Galle International Stadium tomorrow.

The former captain and number three batsman were caught on camera engaging in card games as Sri Lanka were collapsing in a hurry to be bowled out for 135 on the opening day of the first Test. The players were one floor above the dressing room, formerly the press box but now reserved for families of the players.

There was intense criticism at the players’ action and Sri Lanka Cricket decided to send all additional players home. During COVID times, the squad has been extended to 22 players. So while five players were sent home on Tuesday, two more will be leaving the bio-bubble on the day of the match reducing the squad to 15 players.

Lakmal and Oshada have been on the mend for more than a month now. They were taken to South Africa still recovering from injuries and failed to get back to full fitness during the Test series and were unavailable for the opening Test against England as well which Sri Lanka lost by seven wickets.

Lakmal, Oshada and Lakshan Sandakan who were all involved in card games were lucky not to be sent home or face sanctions.

Kusal Mendis has been axed from the side and one of the three spinners is expected to be dropped as Sri Lanka are looking to strengthen their seam bowling options. Instead of them, Lakmal and Oshada will play.

Niroshan  Dickwella meanwhile will continue to bat at number six. With Dhananjaya de Silva out of the  side, Sri Lanka took a massive gamble by getting Dickwella to bat at six. The thinking of the team management is understandable as they seem to be keen on the  wicketkeeper to take up more responsibility. Dickwella failed. But he’s been backed to come good. His wicket keeping has been pretty good but in Galle he spilled a few chances and his reviewing was appalling.

England meanwhile are expected to rest all three seamers who played the opening Test. So, with Stuart Broad, Sam Curran and Mark Wood expected to be left out, Olly Stone, James Anderson and Chris Woakes are expected to get a game.

England need only a draw to win the series. They have not lost a series in Sri Lanka in 14 years.