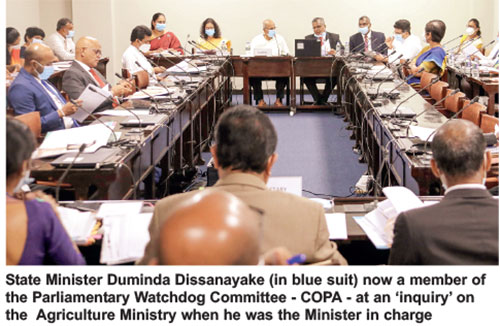 The government hadn’t conducted a proper investigation into the squandering of over Rs 1.5 bn to rent the DPJ Towers owned by Upali Jayasinghe at No 288, Rajagiriya, Kotte, in early 2016 though the transaction received media exposure and a complaint was lodged with the Commission to Investigate Allegations of Bribery or Corruption (CIABOC).

This was revealed at the Committee on Public Accounts (COPA) session chaired by MP Prof. Tissa Vitharana in Parliament on Tuesday (19).

The then Secretary to the Agriculture Ministry Bandula Wijeratne signed the agreement without following proper procedures. At the time the government inked the agreement, it hadn’t received the endorsement of the then Auditor General Gamini Wijesinghe. The then yahapalana Agriculture Minister Duminda Dissanayake is now a State Minister in the ruling SLPP party. SLFPer Dissanayake contested the last general election on the SLPP ticket.

State Minister Dissanayake particpated at the meeting as a member of the parliamentary watchdog committee.

Following the COPE meeting, the Communication Department of the Parliament said that the decision to shift the Agriculture Ministry from the state-owned Govijana Mandiraya, which was used to house the offices for oversight committees of Parliament had been taken by the then Cabinet of Ministers.

The then President Maithripala Sirisena chaired the cabinet.

Well informed sources told The Island that in addition to the two Cabinet papers submitted by Minister Dissanayake, the then Prime Minister Ranil Wickremesinghe, too, submitted one.

Wickremesinghe submitted his cabinet paper on Sept 15, 2015 to establish Sectoral Oversight Committees in the ‘Govijana Mandiraya’ building, which previously housed the Agriculture Ministry.

COPA Chairman Prof. Vitharana has suggested that the government should decide on the space available for public officials to express their views on disputed or debatable decisions taken by the Cabinet. However, sources pointed out that though the Cabinet had made policy decisions relevant officials tasked with preparing cabinet papers had ample opportunity to point out shortcomings.

Prof. Vitharana said so at the discussion on Special Audit Report on the acquisition of the building. The COPE called for a formal inquiry regarding leasing of the building at a cost of Rs 1,524 mn. The COPE held that those responsible for the transaction acted contrary to the procurement process.

Karu Jayasuriya, who was the Speaker at the time of the signing of the controversial agreement, told The Island that the decision to shift the Agriculture Ministry to a private building had been taken by the government and not by parliament contrary to a claim by Mahinda Amaraweera, who succeeded Duminda Dissanayake in a mini cabinet reshuffle.

In spite of finalising an agreement for a five-year period at a cost of Rs 1 bn, the building at Rajagiriya-Kotte wasn’t occupied for well over a year.

Wickremesinghe and Dissanayake appeared before the Presidential Commission appointed by President Sirisena following the SLFP’s exit from the yahapalana government. However, the police never initiated action despite the commissions’s findings and revelations by the Auditor General in his report.