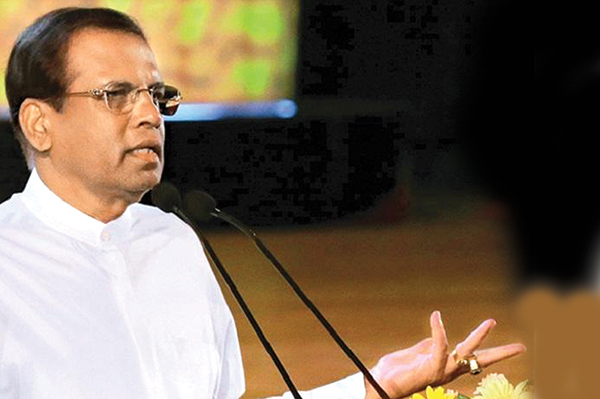 “I also do not believe that Zaharan was the leader of that organisation. Because a leader would never have initiated a suicide attack and died during the first wave,” Sirisena said.

The former President also said that Islamic extremism had spread rapidly in the country due to the support extremists received from Muslim politicians.

Sirisena also said that the military and intelligence officials had been demoralised by harassment they suffered during the yahaalanaya administration. This was the reason why local institutions failed to uncover NTJ’s plans. “But this incident is a conspiracy because it appeared that Zaharan was being manipulated by some foreign hand,” the former President said.

The President further said that during the previous administration, UNPers had headed the Ministry of Law and Order for several years that they had significantly weakened the intelligence services. Although he had taken the Ministry of law and Order in the last stages of the yahapalana government, he had not been able to undo the damage the UNP had done in four years, the witness said.

Commissioner: “Did you know that during your tenure as President, Muslim MPs and ministers were forcible acquiring land in Vanni and Batticaloa and they were constructing Muslim villages and mosques there?”

Sirisena: “Some ministers used their political power to clear forests and cultivate lands. Some ministers were angry with me when I tried to stop them. I tried hard to control those actions. But it was difficult for me to deal with that situation. Fundamentalism rose due to the protection given by Muslim political leaders. Certain political parties are based on religion, race and language. This is disastrous. I tried to stop these people but my decisions were not implemented.”