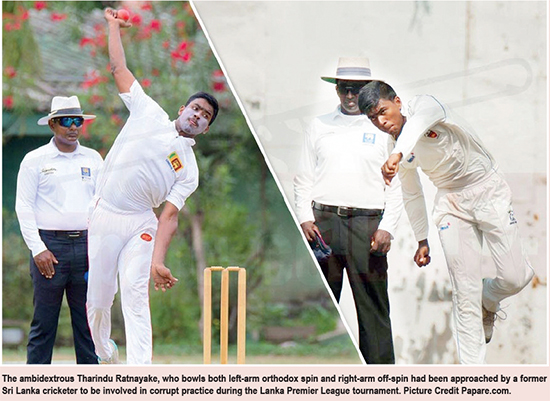 A former Sri Lanka cricketer is under probe after his alleged attempt to entice a player into corrupt practice in the inaugural Lanka Premier League tournament that will get underway today at Hambantota.

The former player – an off-spinner with a dodgy action – had represented Sri Lanka frequently from 2012 to 2016 before being discarded after being reported for a suspect action. He has featured in various T-20 leagues since losing his spot in the Sri Lankan side. Cricket officials said that he had been under the spotlight for corrupt activities but had escaped punishment due to lack of evidence.

The player who was approached was former S. Thomas’ College, Mount Lavinia spin bowler Tharindu Ratnayake. The ambidextrous Ratnayake bowls both left-arm orthodox spin and right-arm off-spin and represents Sinhalese Sports Club in domestic cricket. The former Sri Lanka player had got to know him at the club having also played for the Maitland Crescent club.

Ratnayake had reported the approach after he received a Watasapp message tempting him to corrupt practice during the Lanka Premier League. Ratnayake represents Colombo Kings.

Sri Lanka Cricket officials said that while they were disappointed that something of this nature had occurred on the eve of the tournament added that they were happy that players are taking corruption in the sport seriously.

“We have spent a lot of time, energy and money educating our young players of dangers of corruption and we are glad the incident was reported,” a senior cricket official told The Island.

The official said that Mathews also had vehemently opposed an Indian player who was banned for corruption being flown in to be part of the Colombo franchise which Mathews leads.

The LPL will get underway today at Hambantota and the scandal was the last thing the organizers wanted having gone through many difficulties in making the event a reality. The organizers were working in a short time frame to make this a reality and in the middle of that the outbreak of the pandemic threatened the event.

Sri Lanka Cricket has successfully worked with health authorities in bringing down overseas players, support staff and television crew who have gone through isolation before being drafted into a bubble to resume training ahead of the tournament.