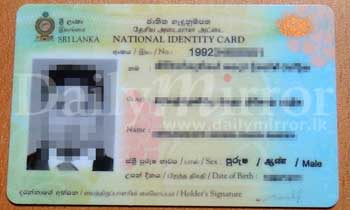 A web service would be introduced to certify the authenticity of the particulars of the National Identity Card (NIC) in the near future, the Department for Registration of Persons (DRP) yesterday said.

DRP Commissioner-General Viyani Gunathilaka told Daily Mirror that after the Smart-ID Card was launched in 2017, details of all citizens were re-registered into a database called the National Persons’ Registry (NPR) as an interim solution until the e-National Identity Cards (e-NIC) were issued.

He said biometric details of persons will be inserted into the NICs in the future.

“Any prescribed authorities such as financial institutions, mobile companies, police departments can avail the facility following an agreement after signing a Memorandum of Understanding (MoU) with the DRP Commissioner,” Mr Gunathilaka said.

After obtaining the facility, the authorised institutions can enter a NIC number along with other relevant details into the system to ascertain whether the NIC was genuine or not, he said.

“No procedure had been introduced in the past to check the authenticity of the NICs and this will be the first time in the history to introduce such a system. We have completed more than 90 per cent of work with regard to the new service,” the Commissioner said.