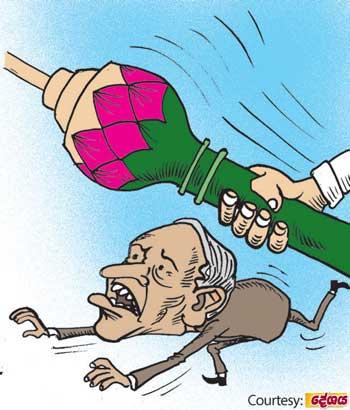 Number One had other day tongue-lashed the white-collar high-up who had misinformed him about the advance payment of Rs. 2 billion allegedly made to a Chinese company in 2012 in connection with the construction of Nelum Kuluna in the presence of the latter’s brother who is a Diyawanna member.

This white-collar highup is said to have made this ‘revelation’ to Number One in the presence of a number of peers and superiors as a vital piece of information he received from no lesser person than a top executive, who once served under Number One himself and is currently serving in a high capacity abroad. The poor man had got egg on his face by passing on a piece of information with the belief that he was doing his boss a good turn, they say.