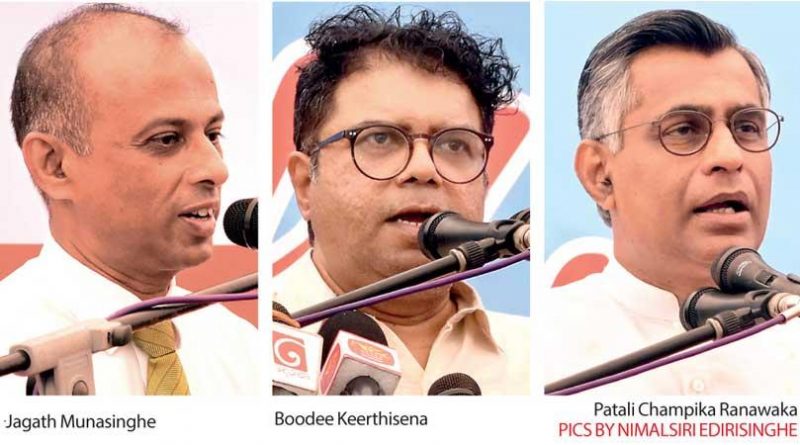 Bringing in new hopes to the Sri Lankan cinema industry, construction work for Cinecity Waterfront and Art Centre commenced yesterday.
Back in the day Pettah has had strong links to Sinhala Cinema and was frequented by artistes and those who appreciated arts. This culture eventually died down. But 105 years later, Pettah will once again transform into a cultural hub once the venue opens to the public. The multipurpose cinema complex situated in close proximity to the private bus stand in Pettah will include two cinema halls with the latest technology in addition to other spaces to share and promote various perspectives related to films, arts, music and literature. The arts centre will facilitate books or art exhibitions, film discussions, muhurath ceremonies, premieres and press shows.
Minister of Megapolis and Western Development Champika Ranawaka said that Pettah and the entire zone is subject to a massive transformation in the near future. “The Floating Market commenced operations during the previous regime but the vendors didn’t have many sales. Many of them closed down and they requested us to shift their stalls elsewhere. People in Pettah are used to the pavement business. The lake emanated a stench which was quite an obstacle for the people of this area. But we have been able to clean the main Beira Lake area close to D. R Wijewardena Mawatha and it has attracted many birds while many people also do fishing as a livelihood.
“We are also constructing a walking path. Some underprivileged families living in this area have also been shifted to permanent houses. We also hope to establish a water pumping facility at the break water near the Presidential Secretariat where garbage and faecal matter gets accumulated and ultimately flow to the sea. The Manning Market is now being shifted to a 25-acre area of land in Peliyagoda. By the beginning of next year we will be able to commence operations. Apart from that all retail businesses in the cross streets of Pettah will be shifted to Peliyagoda.”
“Pettah used to be a busy place and nobody liked coming this way,” opined Urban Development Authority Chairman Dr. Jagath Munasinghe. “But with the introduction of the Floating Market the atmosphere has somewhat changed for the better.  When we were thinking how we could improve this area, Dr. Keerthisena suggested the idea of a cinema complex. After considering the proposal, we realised that it would be an effective way to attract people. On the other hand, it will support businesses as well. We hope to complete the project within the next six months and open it to the public. It’s a short term approach towards development while other long term projects are already in the pipeline.”
Speaking at the event, Managing Director of Cinecity Film Lanka Ltd. Dr. Boodee Keerthisena reflected on how his father and great grandfather contributed to the Sinhala film industry at its inception.
“My great grandfather used to run a basic cinema facility called Violet Hall where he has worked with artistes even before the Eddie Jayamanna era.

Then my father constructed another hall and later we were able to establish CineCity, Sri Lanka’s first multiplex cinema hall. We were also able to introduce the Dolby Atmosphere sound system for the first time in Sri Lanka.
“By launching this cinema complex and art centre we will be able restore a lost culture in the birthplace of Sinhala cinema. Once the project is concluded it will draw the attention of people who appreciate arts. Even those waiting for a bus will be able to drop in and have a look at what’s in store for them.”
In addition to completing this project, plans are also underway to rebuild the Gamini Theatre in Maradana which was burned down in 1983, at a cost of approximately Rs. 200 million.