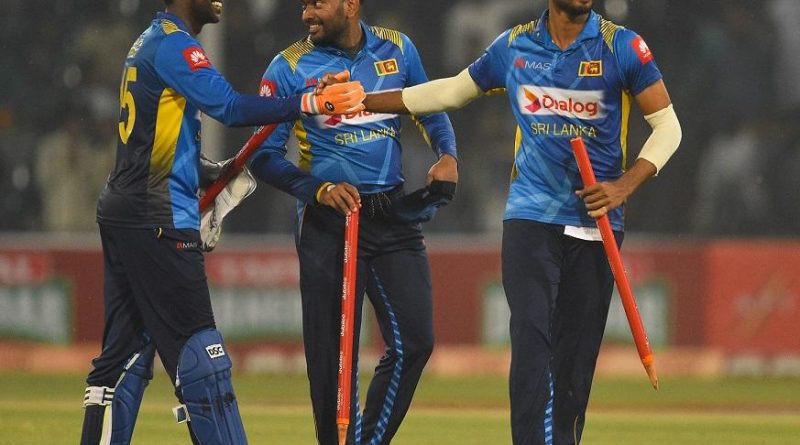 LAHORE AFP Oct 5, 2019: New-look Sri Lanka achieved their biggest T20 win over world number one Pakistan by 64 runs on the back of some brilliant batting and bowling in Lahore on Saturday.

Opener Danushka Gunathilaka scored a career best 57 and despite a hat-trick by teenage Pakistan paceman Mohammad Hasnain Sri Lanka posted a challenging 165-5 in their 20 overs.

Fast bowlers Isuru Udana (3-11) and Nuwan Pradeep (3-21) then dismantled Pakistan for 101 in 17.4 overs to give Sri Lanka a 1-0 lead in the three-match series. Pradeep had world number one Twenty20 batsman Babar Azam in the second over to set the platform for their biggest win against Pakistan in 19 bilateral matches.

The previous biggest T20 win by Sri Lanka over Pakistan was by 37 runs at Hambantota in 2012. Pakistan needed a big innings from Azam who promised much with two boundaries but was caught behind off Pradeep.

Comeback stars Umar Akmal fell for a first ball duck while Ahmed Shehzad managed just four before skipper Sarfaraz Ahmed (24 off 30 balls) and Iftikhar Ahmed (25 off 24) added 46 runs for the fourth wicket. However, they batted slowly and the asking rate soared.

Udana then chipped in with three wickets and spinner Wanindu Hasaranga two to stun a miserable Pakistan. The win is significant for an inexperienced Sri Lanka team — ranked eighth in Twenty20s — who are missing ten top players, including regular skipper Lasith Malinga, who all refused to tour over security fears.

Earlier, Gunathilaka scored a 38-ball 57 with eight boundaries and a six during a quick 84-run opening stand with Avishka Fernando who made a 34-ball 33 with three boundaries after Pakistan sent them into bat. Debutant Bhanuka Rajapaksa hit a solid 22-ball 32 with two sixes and as many boundaries while skipper Dasun Shanaka chipped in with a fiery 10-ball 17 with two sixes.

Sri Lanka were looking set for a big total but paceman Hasnain derailed them with wickets of Rajapaksa off the last ball of the 16th over before dismissing Shanaka and Shehan Jayasuriya off the first two balls of the 18th over to complete a hat-trick.

Hasnain’s hat-trick is the ninth in all Twenty20 internationals with Malinga registering the feat twice. Hasnain is the second Pakistani after Faheem Ashraf to achieve a hat-trick. Ashraf achieved the feat against Sri Lanka two years ago.

The remaining two matches will be played on Monday and Wednesday — also in Lahore.

Isuru Udana not out 5

Wanindu Hasaranga not out 7