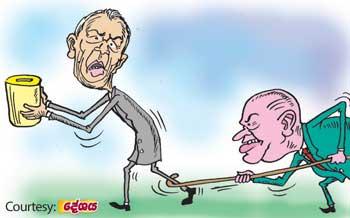 Political maverick Naga who has been grooming himself as an aspirant to top office for several years later entered into an alliance with the other maverick Palle, who entered the fray more recently.

The duo later made an announcement that they were inviting the academics, professionals and other intellectuals to throw in their lot with their alliance. A few weeks later, Palle and his supporters fell out with Naga. The bone of the contention was the charge made by the Palle faction that Naga was concentrating more on raising funds for the alliance than on strengthening it. There had been a slanging between the two factions, the outcome of which is that Naga and Palle are no longer on talking terms, they say. Now that their alliance has gone on the rocks, Naga and Palle are planning to enter the race separately, they say.