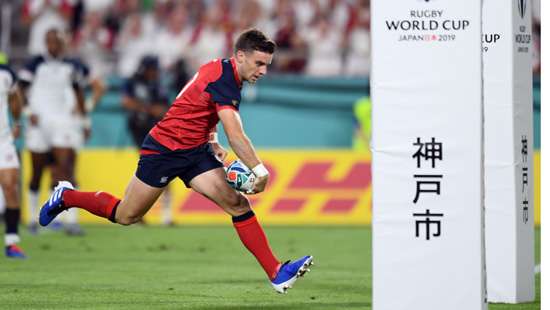 England coach Eddie Jones hailed George Ford after the fly-half guided the side to a 45-7 rout of the United States at the Rugby World Cup in Kobe on Thursday.

Jones’s men ran in seven tries and conceded just one — in the 81st minute — in humid conditions under the closed roof of the Kobe Misaki Stadium to make it two bonus-point wins from two Pool C matches this tournament.

The kicking game of Ford, leading the side in place of benched regular skipper Owen Farrell, ensured England dominated territory.

Ford scored England’s first try with a darting break and his two penalties to touch also set up tries off driving mauls from line-outs for Billy Vunipola and Luke Cowan-Dickie.

“George controlled the game well and obviously conditions were difficult out there with 27C and 80 percent humidity, possibly,” said Jones.

“You could feel it in the stands, sweat dripping off you. The ball was hard to handle and there was a period in the first half where we got seduced by the space and tried to play more of a passing game.

“I thought George really led the team well.” Ford added: “It is huge, and a tradition that our scrum and line-out is strong, and the driving maul is an incredible weapon when you can get it going.

“It is about having balance and variety in our game to keep opponents guessing.” Reflecting on England’s progress so far Jones, whose side beat Tonga 35-3 in their pool opener, said: “We are pleased where we are, with 10 points after two games and conceded just one try.

“We are in a good position and know that we will have to play better in our next game (against Argentina),” added Jones, coach of his native Australia when the Wallabies were beaten by England in the 2003 World Cup final.

The United States were reduced to 14 men in the 70th minute when flanker John Quill received the first red card of this World Cup for an illegal shoulder charge on Farrell, who had come off the bench.

“He (Farrell) is missing part of his nose, which is unfortunate, but he is married with a child, so he is going to be OK,” joked Jones.

“He’s not looking for any young lasses in Kobe tonight.” England centre Piers Francis escaped any action, however, when from the opening kick-off he made a reckless challenge on Will Hooley, that saw the US fullback concussed and carried off on a stretcher.

Francis could yet face a citing, however, but Jones said: “We never discuss that area and leave that to whoever it is and take whatever is handed out.” England now have a break until their next pool match against Argentina in Tokyo on October 5, with Jones saying: “We understand they will be playing for their lives and are a passionate and proud rugby country.

“What is important is that we match their passion and play with a fair bit of control.

“It is going to be a wet weather game and we will pick a team to play wet weather rugby,” he insisted.

“This World Cup is unique because of the conditions and you are seeing the Tier Two countries physically better prepared.

“We have played Tonga and the USA and all of them have big, physical packs and are fitter than they have ever been.

“It is a credit to World Rugby — they don’t get too many credits and they deserve credit for driving Tier Two development. It is great for the game.”