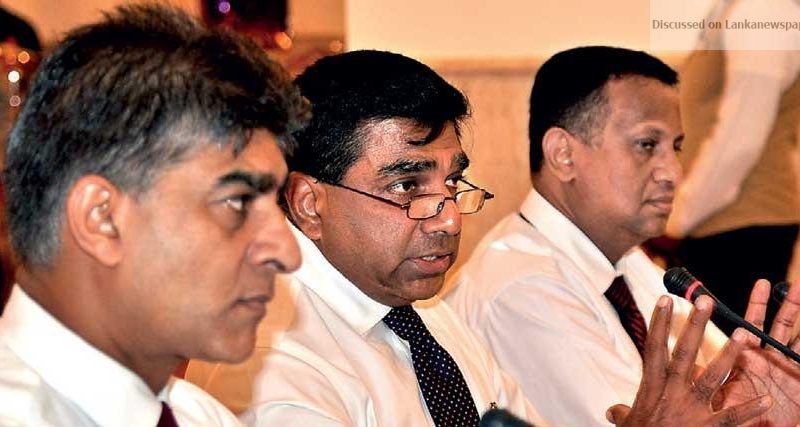 By Nishel Fernando
While strongly denying that Hayleys had imported environmentally hazardous materials into the country, the firm assured that it is working together with the Board of Investment (BOI) and Central Environmental Authority (CEA) to re-export the used mattresses stored at its free zone.
In the light of the current situation, Hayleys Free Zone Ltd (HFZT), a unit of Hayleys PLC, yesterday announced that the firm has taken a decision to process the 101 containers of used mattresses stored at the Katunayake Export Processing Zone in Naikanda and re-export them expeditiously at its cost.
“We are working with the BOI and Central Environmental Authority on how we can get these materials shipped out as soon as possible. We have already started the process.
We have taken the financial ownership as a responsible cooperate citizen to ship it out. We will have to find buyers now,” Hayleys Advantis Limited Managing Director Ruwan Waidyratne told reporters in Colombo, yesterday.
He noted that a company named Ceylon Metal Processing Corporation (Pvt.) Ltd imported 130 containers of used mattresses and carpets through the freight forwarder, ETL Colombo (Pvt.) Ltd, in 2017 and 2018.
However, as this firm faced severe financial difficulties, Waidyratne said it was only able to re-export 29 containers of these materials, after processing.
“In terms of processing, HFZT has been providing services to dismantle the mattresses and separate the fabric, sponge, felt and steel. Everything is bundled and pressed, thereafter, shipped out for various purposes. Some were exported to India, the UAE and some were even going to Australia,” he said.
Waidyratne said Ceylon Metal Processing Corporation (Pvt.) Ltd is headed by its CEO and Director Muthuramar Sasikumaran.
He strongly denied the reports that these used mattresses contained environmentally hazardous materials, while noting that the origin country of these used mattresses, the United Kingdom, doesn’t allow export of hazardous materials to developing countries.
He also added that these spring mattresses are not used in hospitals, as claimed by certain parties, but used domestically.
The United Kingdom-based exporter of these materials was Vangaads Ltd. Hayleys Advantis Director Dr. Asanka Ratnayke stressed that the cargo was accepted to the Hayleys free zone yard after carefully scrutinising the documents, which stated that the 130 containers were non-hazardous cargo.
The company officials also said that the firm obtained the approval of the BOI to accept this cargo to the free zone for reworking.
Commenting on the letter, which the BOI sent to HFZT in January 2018, HFZT Director Amal Rodrigo said the BOI asked to halt the import of used mattresses, citing the labour-intensive nature of reworking these materials, which could be used for other purposes and concerns over recycling. Waidyratne noted that HFZT immediately halted the imports while noting that the firm however had to accept one shipment of used mattresses, which was already on the way, with the approval of the BOI.
“One shipment was already in the water. We got the approval for that from the BOI and thereafter we halted any new shipments,” he said.
Rodrigo confirmed that the BOI didn’t cite any health or environmental risks arising from importation of used mattresses to the country.
“The BOI didn’t see anything wrong with importing used mattresses and they allowed us to bring such to the country,” he said.
Further, HFZT denied the claims that 102 containers, which are at the Colombo Port, are destined to the Katunayake Export Processing Zone in Naikanda, despite such were being imported by Ceylon Metal Processing Corporation (Pvt.) Ltd.
“We have absolutely nothing to do with the 102 containers at the Colombo Port,” Waidyratne emphasised.
The free zone was set up at the Katunayake Export Processing Zone in Naikanda by Hayleys in 2014, with an investment of Rs.2 billion. The Hayleys officials said HFZT has created over 400 direct employments within its zone.
They further said the storing and reworking of used mattresses represent only an insignificant fraction of HFZT’s operations, as the firm processes 8000 containers per annum.