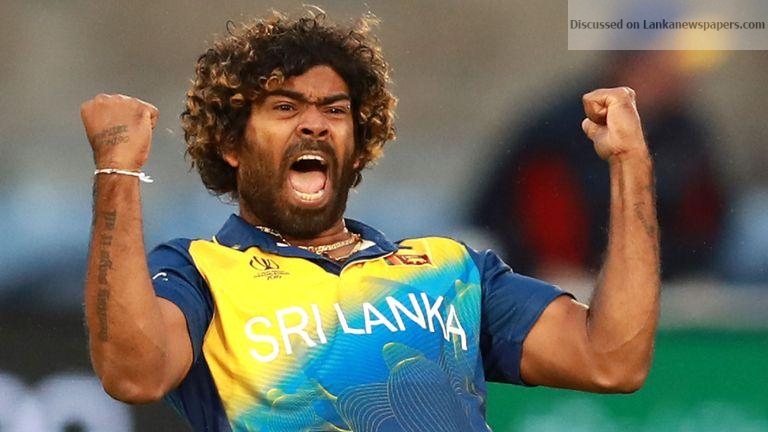 Veteran seamer Lasith Malinga will end his ODI career on July 26 when Sri Lanka play Bangladesh in the first game of a three-match series. He will continue to be available for T20 cricket.
Sri Lanka will have three matches against Bangladesh on July 26, 28 and 31 at the R Premadasa Stadium in Colombo but Malinga will only appear in the first one, a decision he reached during the World Cup in England.
Even though selectors have asked him to play the entire series, Malinga confirmed that he will step out after the first game as feels tired.
He leaves as Sri Lanka’s third highest wicket-taker in ODI cricket with a current tally of 335 wickets in 219 innings, but more significantly he will be remembered as a mercurial talent who captivated the cricketing world with his unique bowling action. Only Muttiah Muralidaran (523) and Chaminda Vaas (399) have taken more wickets than Malinga.
At 36, Malinga was Sri Lanka’s top wicket-taker at the World Cup, claiming 13 scalps in seven innings and could have continued for a few more years in the format. But he believes it is the right time to leave, giving selectors space to nurture fresh talent leading up to the next World Cup.
One of just seven Sri Lankan bowlers to capture 100 or more wickets in Test cricket, Malinga battled a chronic knee injury for a prolonged period during his career and was forced to retire from the longer format in 2011 at the age of 27 to extend his presence in white-ball cricket.
Discovered in his teens by former Sri Lanka bowling coach Champaka Ramanayake playing soft-ball cricket in Ratgama, Malinga became an instant hit with his unconventional bowling action. He then developed a yorker that terrified even the world’s most technically correct batsmen. It was the hallmark of his career.
Even though players in the calibre of Mahela Jayawardene, Kumar Sangakkara, and Tillakaratne Dilshan played significant roles in Sri Lanka’s excellent run in global tournaments from 2007-2014, the contribution made by Malinga is unquestionable.
He is the only man to have three hat-tricks in ODI cricket, including four off four balls leading Sri Lanka to the brink of victory against South Africa in the 2007 World Cup.
His career took a beating lately. Following a knee surgery, Malinga broke into the national side at the Champions Trophy in 2017 but failed to return to his old form. After a couple of series, however, he went out of selectors’ favour before fighting his way back into the side again. He led Sri Lanka in an ODI series in New Zealand replacing Dinesh Chandimal as skipper early this year but was replaced by Dimuth Karunaratne for the World Cup following a player “revolt”.
Malinga’s departure will be a death blow to the Sri Lankans who are struggling to become a force in the limited-over formats over the last couple of years.
“Malinga’s retirement will give us an excellent opportunity to find and nurture the next generation of fast bowlers,” said Chief Selector Ashantha de Mel.
The extended 22-man squad has seven fast bowlers including Malinga, and five spinners and ten batsmen.
While players like Akila Dananjaya, Niroshan Dickwella, Dasun Shanaka, Danushka Gunathilaka and Lakshan Sandakan have made their way into the side after having missed the World Cup, the selectors had mysteriously dumped Angelo Perera and Oshada Fernando, two World Cup standbys. Perera and Fernando missed Sri Lanka’s A tour to India and the emerging tour to South Africa as they were traveling with national team during the World Cup and their axing from an extended squad baffles many.
“We have given them the practice match and, if they perform well in that, they can get into the squad,” De Mel said. “There’s no restriction to limit the squad.”
Another notable exclusion is Dinesh Chandima, the former ODI captain, who has been snubbed for the second time six months after leading the side against England in a home series.
Meanwhile, Bangladesh on Friday named opener Tamim Iqbal as interim captain for the upcoming Sri Lanka tour after regular skipper Mashrafe Mortaza was ruled out with a hamstring injury.