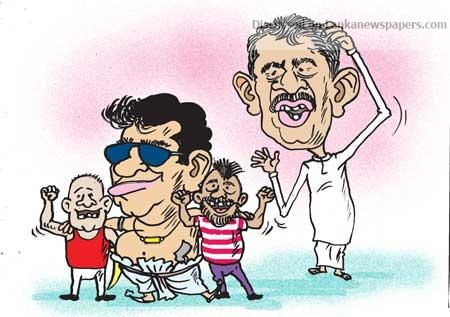 Big mouthed Gemunu is said to be seeking Green party nomination to contest at the upcoming general poll. However, indications are that he has to forego Kelaniya in favour of the Marshall.
By the way, some political sources say that Gemunu stands a better chance of winning Kelaniya given the presence of a good number of ‘boys’ loyal to him in Kelaniya.
Meanwhile, Gemunu’s ‘boys’ have reportedly told the green party high-ups that they cannot support the Marshall as the latter’s ‘boys’ who are Green diehards are hostile to them.
Therefore, Gemunu’s ‘boys’ have decided to stage street protests demanding that their boss be nominated to contest Kelaniya.
The Marshall now aware of the developing situation is said to be having second thoughts about going round the electorate in future with Gemunu in tow.