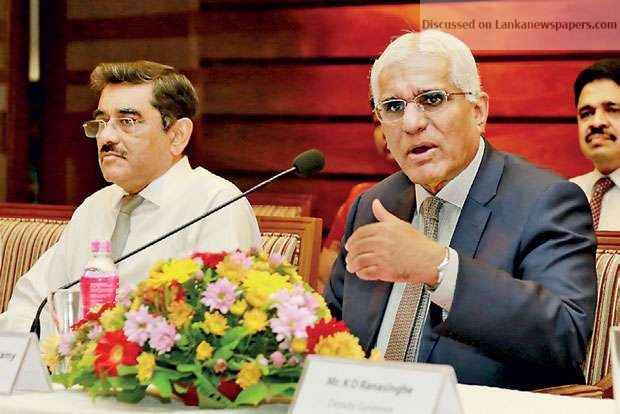 Sri Lanka may consider extending the ongoing three-year International Monetary Fund (IMF) loan programme by another year amid sovereign rating downgrades and pressure on foreign reserves.
“There are provisions for the programme to be extended by another year. So that’s something that the government could engage. I believe it’s worth considering,” Central Bank Governor Dr. Indrajit Coomaraswamy said yesterday.
The IMF suspended the US $ 1.5 billion Extended Fund Facility programme with Sri Lanka despite reaching a staff-level agreement, as the country entered into a political turmoil with the appointment of Mahinda Rajapaksa as Prime Minister on October 26 by President Maithripala Sirisena, breaching the constitution.
The three-year IMF programme was set to be expired in June, this year.
Central Bank Senior Governor Dr. Nandalal Weerasinghe noted that there are provisions in the agreement with the IMF to extend the period as well as to enhance the financing facility.
“It’s an option; what we have to see is that how much additional funds we can get and what are the terms and conditions attached to it. All of those things have to be negotiated,” Dr. Coomaraswamy said.
Sri Lanka’s foreign reserves have come down to US $ 6.94 billion at the end of this year, while the rupee depreciated over 16 percent in 2018.
Dr. Coomaraswamy said that almost all funds have been raised to repay for the US $ 1 billion sovereign bond maturing this month.
“As far as the sovereign bond repayment is concerned this month, there’s a carryover of US $ 650 million in terms of the Hambantota port lease payment, a term loan from Bank of China.

We only need to find US $ 350 million more. We pretty much have found all of that.”
According to the Central Bank, Sri Lanka’s foreign currency debt servicing this year is estimated at US $ 5.9 billion, which includes Sri Lanka Development Bonds (SLDB). However, the Central Bank plans to extend the maturities of SLDB.
Hence, Sri Lanka has to raise around US $ 3 billion for foreign debt repayments this year.
Dr. Coomaraswamy emphasised that if the political crisis wouldn’t have disrupted the staff-level agreement with the IMF, Sri Lanka would not have faced sovereign rating downgrades by all three international credit agencies and by now the country would have raised most of the funds for debt repayments.
“We are picking up threads from where we were prior to October 26.”
He announced that Sri Lanka would go for an international sovereign bond (ISB) issue shortly after securing the necessary approval from the government.
“We would like to get ourselves ready quickly as possible and then we will look for an opportunity in the market; depending on the market conditions, we will go as quickly as possible,” he said.
The governor also revealed that the Central Bank has also finalised a SAARC swap worth of US $ 400 million with the Reserve Bank of India (RBI).
The Central Bank also expects US $ 500 million from Bank of China next month, after upsizing the US $ 1 billion syndicated loan.
Dr. Coomaraswamy further revealed that the Central Bank is negotiating with RBI, Bank of China and Qatar Central Bank to obtain additional swaps while supporting People’s Bank, Bank of Ceylon and National Savings Banks to raise money from other commercial banks in the Middle East.
The governor expressed his confidence that Sri Lanka would shortly get back on track with the IMF programme.
“We had three conversations with the IMF and they have expressed that they are happy to engage. The finance minister will soon engage with the IMF.
The programme needs to be reviewed. The broad parameters will be the same. However, there will be some leeway to negotiate,” he said.
However, Dr. Coomaraswamy stressed that the government should continue to remain on the fiscal consolidation path while accelerating the structural reforms to support growth for these plans to succeed.
“We are a low-middle-income country now. If we have an undisciplined budget and poor policies, we will be downgraded again. We will lose access to capital markets.
A significant growth of merchandise exports of at least 10 percent with annual FDI flows in the range of US $ 2 to 3 billion, supported by healthy earnings in the services sector and continuing contributions from worker remittances are needed to ensure a gradual rebalancing of the current account and a strong financial account,” he said.