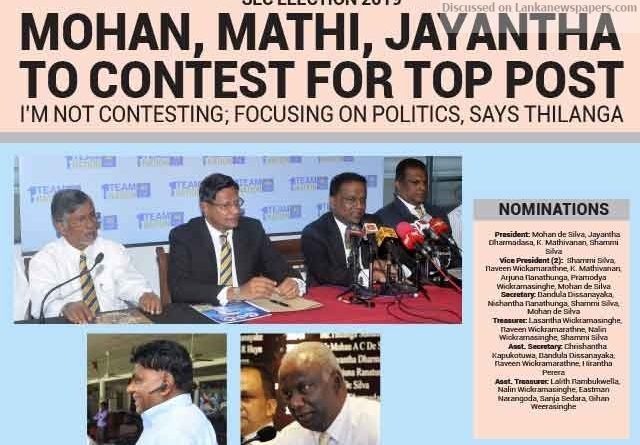 A three-cornered battle looms for the Presidency of Sri Lanka Cricket (SLC), as top candidates submitted their nominations for the post.
Former SLC Secretary K. Mathivanan, immediate former Vice President Mohan de Silva and former President Jayantha Dharmadasa have submitted their nominations for the top post at the closing date yesterday.
Former Secretary Nishantha Ranathunga is contesting for the same position and is teaming up with Mathivanan, while Bandula Dissanayaka is contesting for the position of Secretary from Mohan de Silva’s camp.
Former Sri Lanka skipper and former President Arjuna Ranathunga and former SL cricketer Pramodya Wickramasinghe have submitted their nominations for the post of Vice President.
Immediate former President Thilanga Sumathipala is supporting the candidacy of Mohan de Silva, who served as Secretary and Vice President under Sumathipala during their last tenure.
During the press conferences which was held by candidate Mohan de Silva yesterday after submitting his nomination, Sumathipala said he is not contesting because he is heavily involved in politics. “With the vision of former Sri Lanka President Mahinda Rajapaksa and President Maithripala Sirisena, we are working on building a united country, so I have a lot of work to do and it is very difficult to allocate all my time on SLC matters,” said Sumathipala.
He stressed it was due to his political work and no other reason that he is not contesting for the post of SLC President. “A lot of people try to sling mud at me, but no one can put me down.”
He further said he has fully confident Mohan de Silva and his team will triumph at the SLC election. “I will give my full support to them and I believe we can win,” said Sumathipala.
Jayantha Dharmadasa, who was the SLC President before Sumathipala took over, has submitted his nomination as an independent candidate.

Dharmadasa also submitted his nomination for the Presidency during the last election, but later withdrew it to support Thilanga Sumathipala and was elected as a Vice President. But he resigned from his post midway and the vacancy was filled by Mohan de Silva.
Mathivanan, who served as Secretary under Sumathipala, will be supporting Nishantha Ranatunga’s camp this time around.
The post of Treasurer is being contested by MCA’s Nalin Wickramasinghe who is supporting Ranathunga’s team, while Lasantha Wickramasinghe is contesting from de Silva’s camp.
Former SLC Treasurer Shammi Silva, too, has submitted his nomination for the post of President, as a contingency move in case de Silva’s nomination is rejected, and is set to withdraw his name later if there is no hiccup in de Silva’s nomination.
The SLC election was earlier scheduled to be held on 31 May, but was postponed due to a Stay Order by the Appeal Court. Taking this into consideration, ICC gave a grace period which was extended till February for SLC to hold the election. Former Sports Minister Faizer Musthapha appointed Sports Ministry Secretary Kamal Pathmasiri as Competent Authority thereafter instead of an Interim Committee.