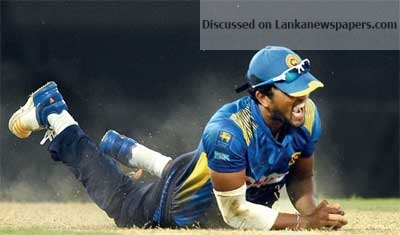 Sri Lankan cricket captain Dinesh Chandimal takes a catch to dismiss England cricketer Moeen Ali during the fifth and final one day international (ODI) cricket match between Sri Lanka and England at the R. Peremadasa Stadium in Colombo on October 23, 2018.

The national cricket team made a hue and cry last year when awful fielding threw them out of the Champions Trophy. There were two highly publicized slogans coming out of Maitland Place. One was ‘fielding is non-negotiable’ and the other being that the team desperately wanted ‘three dimensional players’. The truth is that they did precious little to address the appalling fielding standards. Players dictated terms to the Fielding Coach on both the quality and quantity of fielding drills. They still do so and the results have been dreadful.

You suspect that there’s no genuine desire to address this vital discipline. The Sri Lankan teams that were successful in the past had one of the best fielding sides in the world. The Sri Lankans were Asia’s best fielding side by a mile.  But today, India is in a different league when it comes to fielding.  Bangladesh and Afghanistan look sharp while Pakistan have made tremendous progress under Mickey Arthur. And we Sri Lankans bask in past glories.

After the Asia Cup debacle at least the Fielding Coach should have paid the price along with Angelo Mathews. But that didn’t happen.

The Sri Lankan cricket team’s promise to improve fielding standards is like the promise that Ranil Wickramasinghe gives to strengthen the economy.

After Tuesday’s handsome 219 run defeat of England at RPS captain Dinesh Chandimal took pride at the fielding display his team put up. True there were a couple of sharp catches including a diving effort from Chandimal. But hey, the Sri Lankan fielding has not set the world on fire. Still, it is better than what it used to be although they have got a long way to go to regain the fielding glories of past that had won them many tight encounters.

The captain went onto explain that why Kusal Mendis was given the long rope was because of his exceptional fielding skills. Mendis came good with a 30 ball half-century after three ducks in his last four games.

“We looked at his fielding and that was the number one reason we trusted him. His attitude on the field was great. We know that when you have a player like that, he can get into form very quickly. We know how good a batsman he is and we had a lot of trust in that. He took that responsibility on and played well for the team.