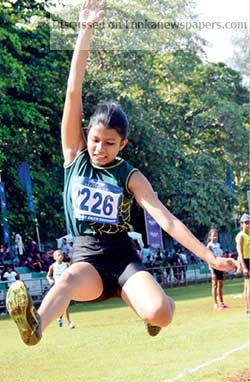 Sandamini proved beyond doubt that she has what it takes to be a future prospect as she cleared 4.79 metres to establish a new meet record in the Under-12 girls’ long jump. Competing on wet ground conditions she was below her personal best but still managed to make a notable jump to break the 14- year old record (4.53m) held by K.U. Kariyawasam of Devi Balika Vidyalaya, Colombo.

It was the second long jump record created by Sandamini within this month. The athlete coached by Prasanna Perera cleared 4.89 metres to establish a meet record at the All Island Schools Games Athletics Championship early this month.

Dahamsa Kahangama of Sumana Balika, Ratnapura clocked 12.6 seconds to equal the Under 15 Girls 80 metres hurdles. The record established by S. Perera of St. Bridget’s Convent, Colombo in 2004 was also equaled in 2008 by K. Perera of Holy Family Convent, Colombo. (RF)