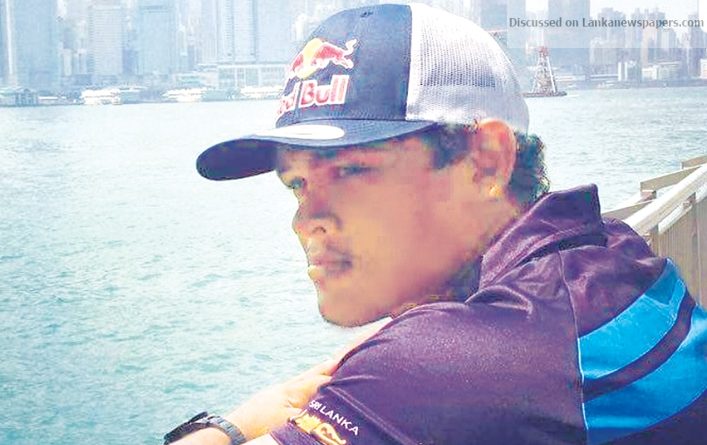 Sudarshana Muthuthanthri, is a huge influence on the rugby field as national captain to transform the short format of the game in which Sri Lanka has always had the talent but presently lacked even an acceptable structure and professionalism to compete successfully in the world sevens arena.

An old boy of S. Thomas’ College Mount Lavinia, Muthuthanthri had remarkable success as the only Sri Lankan player to represent Auckland a top New Zealand team at the highest level as well as captaining Sri Lanka in the Asian sevens series, Borneo sevens, Commonwealth Games and Asian Games. In an interview with the Daily News Muthu as he is affectionately known expresses his thoughts.

Q: Who has helped you to become what you are today?

A: God has guided me throughout.

Q: Any other sports you indulged in as a schoolboy?

Q: Is there anything special in your sporting career?

A: When I wore the Sri Lankan national jersey for the first time it was with pride and honour. I had the same feeling when I wore the New Zealand Auckland sevens jersey as the first Sri Lankan to do so in our country’s rugby history.

Q: In what way did you help the Sri Lankan national Sevens team to achieve success?

A: By using all my experience locally and overseas by bringing up a winning culture to improve as a team.

Q: How would you describe playing club rugby for Auckland and being the only Sri Lankan to do so?

A: It was a very special moment in my life. I really wanted to give my best and learn more. Also to justify my selection to the team, I gave my 100% and in the end I achieved what I wanted.

Q: After that stint in New Zealand how is the hype coming and playing in Sri Lanka?

A: After you play in New Zealand you get in to a very high level by their standards but in Sri Lanka, you can’t maintain the same level right throughout due to lack of a proper structure in place and gradually your level comes down.

Q: How is the injury recovery system in Sri Lanka?

A: At present we don’t have a proper basic injury recovery system in place in the country.

A: What the New Zealand trainers do in New Zealand is not suitable and applicable to Sri Lanka. We don’t have proper nutrition and basic recovery systems in place. Also we definitely need a high performance centre. Even without these basic requirements and the limited resources that we have, I personally believe that our boys are performing more than the expected level.

Q: The present national Sevens team is really poor and down in speed and contact. What are your thoughts?

A: This happens because we are not doing the proper training. We have the natural speed but lack the strength in contact situations. We have to first improve our strength levels. To counter this and move forward Sri Lanka rugby definitely has to contract 25-30 players and the national trainer should have them right throughout the season.

Q: How many training sessions do you carry out for a day?

Q: Are you satisfied on the session by session breaks to rest and the meals you get?

A: Rest is ok but when it comes to nutrition, the quality and quantity is very poor so the performance levels becomes mediocre and does not reach the desired stage.

Q: Why do we fail in our seven a side games restarts and line outs time and time again?

Q: We were outplayed in the rucks your thoughts?

A: It is something to do with our technique, because when it comes to the game of 7’s rugby all seven players should have the ability to play as forwards as well as three quarters.

Q: We still miss one on one tackles, why?

A: That is because we are very poor in our conditioning levels.

Q: Are you injured?

A: Definitely not and I have also in no way verbally or in writing informed the Sri Lanka Rugby authorities that I am injured or not available for national duty as captain or player for the just concluded Asian sevens series 3rd leg in Colombo.

Q: In that case what happened and why didn’t you play?

A: I honestly don’t know. Only thing I knew was that, I was told by the chairman of selectors prior to the announcement of the team that I won’t be selected because I need an operation on my wrist. I was shocked. Also what really baffled me was that this same people have cleared me to play as the Sri Lanka national 7’s captain in the 2nd leg in South Korea and I didn’t get any injury nor was I injured in Korea. Hence after two weeks down the line suddenly why do I need to have an operation? To-date it is really a mystery to me. Please find out from the authorities concerned, since I still don’t know the real reasons as to why I was not selected for the 3rd leg in Colombo.

Q: Our present rugby standards in the Asian Games and the Asian sevens series three legs have dropped dramatically when compared to previous years, especially in 2016 Asian Sevens Series your views?

A: There were many things the former Sri Lanka rugby chairman Asanga Seneviratne did right by bringing in High Performance Director Inthi Marikkar. That way they created a culture that all players have to go through fitness test and achieve the internationally accepted standards. I personally feel that it was really good because all the players finally need to strive hard to achieve the set of standards of fitness to be selected to the national team. Inthi is also a very experienced person and knows both New Zealand rugby as well as Sri Lankan rugby; hence he brought in rugby systems and structures which are suitable for Sri Lankan rugby.

Q: In which area do you think that we have to improve our standards in Sevens rugby?

A: Strengthening and Conditioning and Nutrition are very vital.

Q: We are playing Sri Lanka rugby and by going to play New Zealand rugby are we missing a trick and thereby our performances have declined?

A: That’s the main problem why we are going through a bad patch now, because in New Zealand they are equipped with proper systems and structures, but in Sri Lanka we are not.

Q: What will be your ultimate goal for your present club CH & FC?

A: Definitely to win this year’s league title as well as the Clifford Cup knockout.