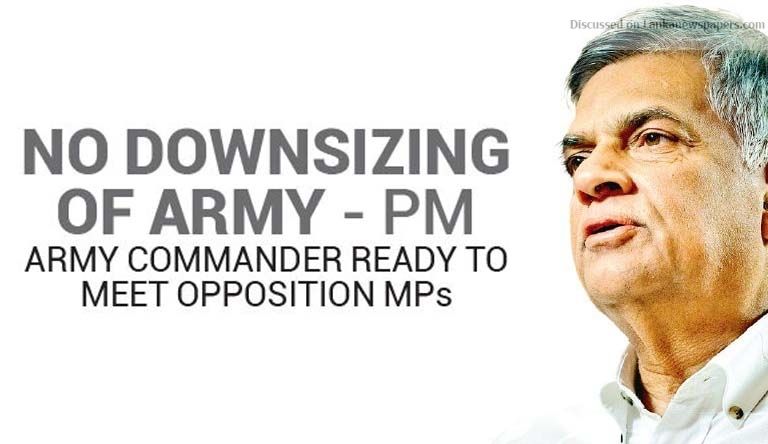 Prime Minister Ranil Wickremesinghe yesterday (18), told Parliament that Army Commander Lieutenant General, Mahesh Senanayake was willing to meet Opposition Parliamentarians to explain the truth behind allegations that the Government was attempting to reduce numbers in the Army cadre.
Wickremesinghe responding to a question by JO Parliamentary Group Leader, Dinesh Gunawardena under Standing Order 27(2), said there were allegations that the Government was attempting to reduce numbers in the Army cadre and reduce the military strength in the country.
Gunawardena said, “According to information we have, 24,266 military personnel including 1,000 Army officers attached to 33 divisions from across the country will be withdrawn and 100 military bases in the country including in the Northern Province, are to be removed. Because of this at least 1,000 Army personnel attached to 33 divisions will be deprived of promotions. This is how this Government is trying to take revenge from war heroes. This is following orders from the UNHRC in Geneva. These acts break the morale of our troops. We should not allow this to happen.
“The Government is attempting to take revenge from war heroes at administrative level but is presenting Cabinet Papers to give compensation to former LTTE cadres. They grant funds to build monuments for LTTE soldiers who died by consuming cyanide. This is a serious problem. I request the Government to explain this matter.”
Premier Wickremesinghe in response assured that the Army or any other security service in the country would not be downsized.  He said, “The Army has proposed restructuring plans and the Government has given permission. The decision to restructure was made by the Army and not by me or by the President. Decisions regarding the Security Forces are made by military officials. The Government has nothing to do with such things. The Army will restructure according to the time and demand but it will not be downsized.”
He said the British Army also went through restructuring after the Second World War. “But we are not cutting down on military ranks and numbers like how they did. The Sri Lankan security forces are well recognized today. That is why they have been called to be a part of the UN Peace Keeping Force in Mali. Also our security forces will play a major role in ensuring the security of the Indian Ocean region as well”, the Premier added.
“I called the Army Commander last morning to get more details on this matter. He told me that he would like to meet the Opposition to explain the real situation behind the restructuring process”, the Premier noted.
Speaker Karu Jayasuriya then instructed the Government to make arrangements for the meeting.

State Minister of Defence, Ruwan Wijewardene replying to Gunawardena noted that a few brigades may be merged but added that there would be no decrease of numbers.  “Some people may say the Army would be weakened by doing so but that is not the truth. The number of soldiers and officers serving the Army will not be reduced. This is an administrative decision to restructure made by the Army itself. Some brigades in the Army do not have the number of personnel as stipulated.

He said downsizing will not happen in such circumstances”, Wijewardena noted. Moreover, Wijewardena said that it was wrong for the Opposition to allege that 100 Army camps in the Northern Province will be dismantled. No Army camp has been dismantled in the North and there is no plan to do so in the future, he added.