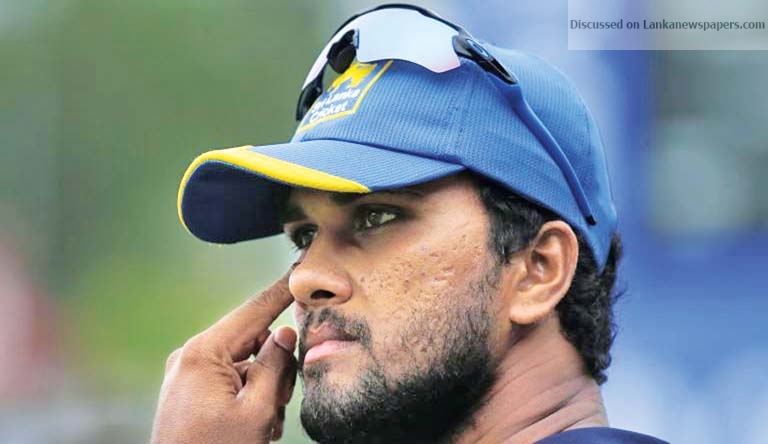 Sri Lanka named Dinesh Chandimal as captain for the upcoming two-Test series against South Africa despite the fact that he has a charge sheet hovering above his head for refusing to take the field on the third day of the second Test against West Indies at St Lucia after the umpires had informed the team that he had been charged with ball tampering.

The hearing to determine Chandimal’s punishment for the charge will be held on July 10, two days before the start of the first Test against South Africa at Galle. The Lankan captain had already served a one-Test ban for ball tampering.

“We have named Dinesh as captain because at this stage he is free to play after having served a one-Test ban,” said chief selector Graeme Labrooy.

“We don’t know how the punishment for the second charge will be. We are hoping that he will be slapped with a penalty and not suspended from matches.”

The worst scenario for Sri Lanka will be if Chandimal is suspended from playing where the suspension can range between two to four Tests. In that event the selectors have taken the precaution of getting fast bowler Suranga Lakmal to captain the side.

Lakmal did an excellent job as captain leading the team to a series leveling win in the third and final Test against West Indies at Bridgetown by initiating early breakthroughs for his side that eventually ended up in a four-wicket win.

“Lakmal has the highest respect from not only his team members but from the entire squad of players,” said Labrooy. “If there is a popularity contest amongst the players Lakmal would easily run out the winner.”

Lakmal has been named vice-captain to Chandimal. This is the third series that he carries that tag having first being appointed for the tour to Bangladesh early this year and retaining it for the tour to West Indies. Sri Lanka will gladly welcome the return of established opener Dimuth Karunaratne to the side. The southpaw had to forego the tour to the Caribbean after fracturing the index finger of his left hand at practice. However a tour to the Bangladesh as captain of the Sri Lanka A team where he came up with scores of 60 and 161 against Bangladesh A in the first four-day unofficial test at Chittagong last week confirmed that he had fully recovered from his injury as well his match fitness.

The question here is who will open the batting with Karunaratne? In his absence Sri Lanka struggled with their opening combinations in the Caribbean trying out as many as four players in that position.

“We are looking at Kusal Mendis because the head coach feels that in subcontinent conditions he will be able to score heavily,” said Labrooy.

As a stop gap opener in the first Test against West Indies at Port of Spain, Mendis scored a century in the second innings, but reverted back to the middle order for the rest of the series when Mahela Udawatte was selected to fill that slot partnering Kusal Perera. Udawatte had a rather poor series scoring two ducks in four innings and has been overlooked for the South African Tests.

Former captain Angelo Mathews returns to the Test side having returned home after just one Test in the Caribbean to attend to the birth of his second child.

There are no newcomers to the rest of the squad with the exception of Kusal Perera and Rangana Herath being named subject to fitness.

“Kusal who suffered a side injury in the third Test against West Indies and Rangana who had sutures removed yesterday in the webbing between the fourth and fifth fingers of his right hand will both undergo fitness tests on July 9 and 10,” said Labrooy who expressed confidence that they would pull through.

Sri Lanka play South Africa in the first Test at Galle from July 12-16 and second Test at SSC from July 20-24.