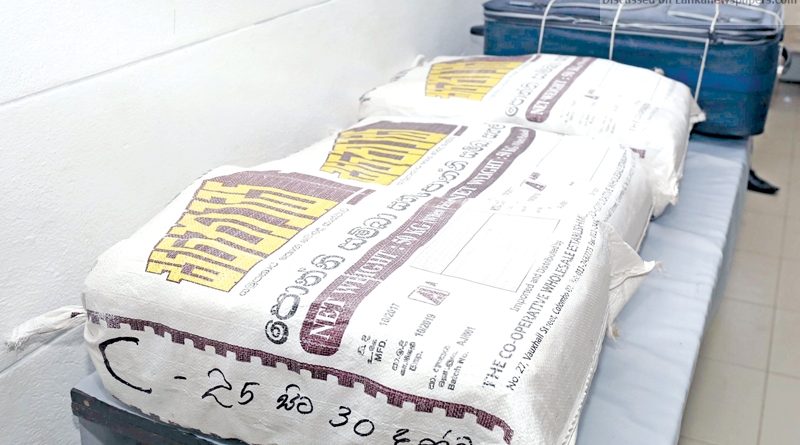 The Police Narcotics Bureau (PNB) seized 103.9 kilogrammes of heroin worth Rs.1,248 million on Saturday night in one of the department’s biggest drug busts ever.

The Police were also able to arrest two suspects with the drugs.

Acting on a tip off, PNB officers found 33.3 kilogrammes of heroin concealed in a jeep at Prathibimbarama Lane in Kalubowila. The heroin was packed inside 30 parcels and the two suspects were arrested with the jeep.

Upon further questioning, the PNB was able to raid a three storey house at Subhoythipura, Battaramulla and was able to seize 70.5 kilogrammes of heroin concealed in 66 parcels.

The PNB was able to seize 96 parcels of heroin weighing 103.9 kilogrammes during the two raids conducted.

Speaking to the Daily News, a Police Media Division official said that this drug bust was the largest in the country for 2018.

The Police Narcotics Bureau (PNB) seized 103.9 kilogrammes of heroin worth Rs.1,248 million on Saturday night in one of the department’s biggest drug busts ever.

The arrested suspects were identified as Mohomad Mahir, aged 29 and Mallikarachige Chathura Jayashantha, aged 40. Both suspects were residents of Dehiwala and were scheduled to be produced before the Mount Lavinia Magistrate’s Court yesterday.

Further investigations have revealed that this drug trafficking scam was led by the drug lord ‘Susei’ who is currently imprisoned in the Welikada prison. ‘Susei’ was arrested in 2013 with two kilogrammes of heroin and was sentence to death. The PNB had found text message conversations between ‘Susei’ and Mohamad Mahir from the suspect’s mobile phone and the suspect had revealed the information of the trafficking upon questioning.

In 2016, the PNB detected over 900 kgs of cocaine from an Indian bound ship docked at the Colombo port.

This haul is the largest cocaine seizure recorded in South Asia with an estimated street value of Sri Lankan Rupees 12 billion.

Over 314 kgs of heroin were seized by Drug Law Enforcement Agencies while the Police Narcotics Bureau detected over 23 kgs of Heroin. Cannabis sativa L commonly identified as “Ganja” is the only illegal drug cultivated in Sri Lanka.

In 2017, over 4987 kg was detected by all Law Enforcement Agencies while over 206 kg was seized by the Police Narcotics Bureau.

The prevalence of New Psychotropic Substances (NPS) is causing new challenges to all Drug law Enforcement Agencies and in 2017, the PNB detected a consignment of 542.060 Kg of “Kart” in Sri Lanka. From January to May 2018, law enforcement agencies have seized 31 Kgs of heroin, 2N214 Kgs of cannabis, 18 Kgs of Hashish and 1.2 Kgs of cocaine.