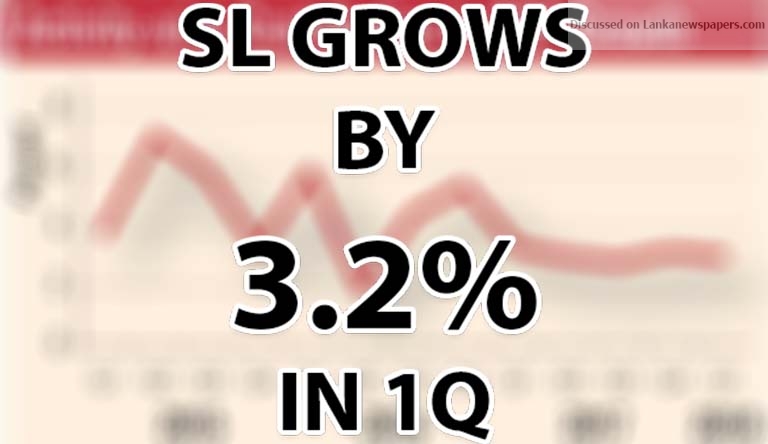 Sri Lanka grew by 3.2% year on year in the first quarter of 2018, slowing marginally from 3.5% expansion seen in the fourth quarter of 2017, the Census and Statistics Department said yesterday.

The four major components of the economy: Agriculture, Industry, Services and Taxes less subsidies on products, have contributed their shares to the GDP at current prices by 7%, 30.4%, 53.6%, and 8.9% respectively for the first quarter of 2018. 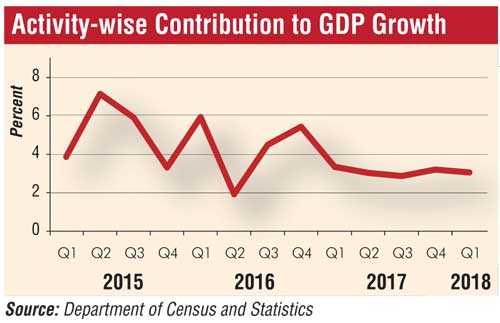 In this quarter, agricultural activities have expanded by 4.8%, while in the first quarter of 2017 it recorded a 4.4% contraction.

The agriculture sector, which recorded negative growth rates consecutively over several quarters due to unfavourable weather conditions, seems to be recovered and commenced recording positive growth rates since fourth quarter 2017.

Industrial activities have expanded marginally, recording a 1% growth rate during this period. Service activities have further expanded by 4.4% in the first quarter 2018, compared to the same quarter in the year 2017.

In the meantime, the substantial negative growth of 13.5% was reported for ‘Growing of Oleaginous Fruits’ (including coconut), due to the continuous drought that prevailed throughout coconut growing areas during the last year. ‘Growing of Rubber’ and ‘Marine fishing and Marine aquaculture’ have also been contracted by 13.9% and 2% respectively in this quarter.

Service activities, which contribute the highest share of 53.6% to the overall GDP, grew by 4.4% during the first quarter of 2018, compared to the same quarter in year 2017. This performance was largely due to the expansion of sub-activities of ‘Wholesale and Retail Trade’, ‘Accommodation, Food and Beverage services’, ‘Telecommunication’, ‘Financial Services activities and auxiliary financial services’, ‘Real Estate activities including ownership of dwellings’, ‘Professional Services’, and ‘Other Personal Service activities’.

Quarterly national accounts estimates are compiled mainly using the provisional estimates provided by the data providers. Based on the actual data received, the DCS has revised the third and fourth quarters of 2017 and the annual 2017 growth rates as 3.2%, 3.5%, and 3.3% respectively.

The International Monetary Fund (IMF) has forecast economic growth to rebound to 4% this year, and the Central Bank has forecast growth of around 5%.

Analysts cited political uncertainties, arising from the ruling coalition’s defeat in local government elections in February, as a fact behind a loss of business confidence.

“On a selective basis, political uncertainty and the currency weakening might have led to a wait-and-see approach in the industrial sector,” said Softlogic Stockbrokers Research Head Danushka Samarasinghe. “We are yet to see clarity on the political front, which leads to concerns of policy consistency and implementation.”