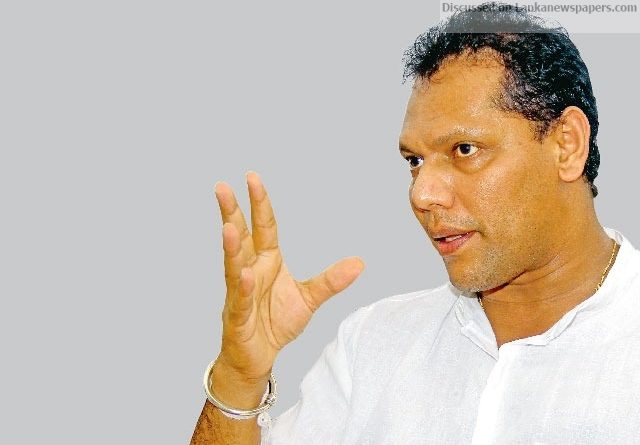 Kurunegala  District UPFA  MP  and  former  Sports Minister Dayasiri Jayasekera  said  on Friday that  the  SLFP  will quit the Government, soon after Party reforms Party are in place.
He said that the situation has reached a crescendo, where the SLFP can no longer work with the UNP and that the partnership has reached a boiling point.
Here, Jayasekera talks to Ceylon Today:

Last week saw the UNP nominating MP Ananda Kumarasiri for the post of Deputy Speaker and the SLFP nominated Dr. Sudharshani Fernandopulle for same. The agreement earlier was for the UNP to nominate Karu Jayasuriya for Speaker and the SLFP to name the nominee for the Deputy Speaker’s slot. Don’t you think that itself was a violation of the Agreement between the UNP and the SLFP?
A:  That is right. The original agreement was for Speaker to be from the UNP and for the Deputy Speaker to be from the SLFP. It was on that basis that Thilanga Sumathipala became the Deputy Speaker; with his  resignation from the post, we nominated MP Angajan Ramanathan from the North, whom the Prime Minister refused to have. Then, came Sudharshani Fernandopulle; a woman who has represented key issues in relation to women’s rights.  So, the UNP masterminded the campaign to defeat her. That is what happened. So, even with the basic tenets of the Agreement between the UNP and the SLFP being violated, we, the SLFP, don’t see the need to remain with the Government and the Cabinet, anymore.

But the question arose when Prime Minister Ranil Wickremesinghe  claimed that the UNP   was forced  to nominate  MP Ananda Kumarasiri as there were no SLFP  backbencher to contest and that SLFP nominated Dr. Sudharshani Fernandopulle despite her being in the SLFP Opposition. How do you see this?
A:  That is true. We are in the SLFP Opposition.  Though we came out of the Government, we are still in the SLFP Opposition.  That should not worry anybody. But the UNP defeated a female. We see this as a completely wrong, as the UNP is constantly talking of the rights of women.

So, is what you mean, that you will form another Government even ahead of the term of this current Government that lapses end 2019?
A: That process and decision is totally in the hands of President Maithripala Sirisena.

What you are saying now, is a point which has also been underscored by former Minister S.B. Dissanayake as well. He told this newspaper of floating a broad Leftist coalition. But he said that no headway has been made in this regard yet.  What are the chances of this happening?
A:  We are confident that this will happen very soon.

Now it seems to be an outright joke that President Maithripala  Sirisena is claiming that he does not know about who compiled the 100-day programme soon after he became the President. Why and how?
A: Sorry. I am unable to comment as I was not with the President at that time and I was not even in the Cabinet at that time.

Don’t you think that it is a laugh and smacks of  ingratitude and  hypocrisy   that President  Sirisena is openly lambasting  the UNP and Prime Minister  Ranil Wickremesinghe  after riding to power on the back of the UNP and the PM?
A: That may be true. But on the other hand, the UNP also coming into power, did some unpardonable things and we knew what was happening within the Government in respect of a large number of matters which were happening under our own eyes.

Can you quote some examples?
A:  One of them was the VAT Bill.  Some of the others included a move by Prime Minister Ranil Wickremesinghe to bring all the bank accounts of State  organizations to the  private sector at a time when the bank employees  went out on strike. These are not acceptable.
Also the Hambantota Port which was given away on a platter.

What is so bad about the Hambantota Port? It was heavily debt ridden and this Government took the best option by doing a debt equity swap. So, shouldn’t you be happy that the project and the Government debt were salvaged?
A: What we feel is that this was sold to the Chinese on a platter. We protested and brought down the Chinese stake in the venture from 80: 20 to  70: 30. Still the framework that the Government of President Mahinda Rajapaksa signed the deal was  far more productive to the country  than the way this Government handled it.
Also, there are the fundamental differences between the SLFP and the UNP on policy. The UNP espouses neo-liberal capitalism and the SLFP espouses principles of social market economics.

What of the SLFP Reforms?  An interim committee has  been appointed  with some names. But what are the real reforms?
A:  We will strengthen the Party by new appointments to regional organizers and branch organizations. We will be making new women’s organizations.

But, the SLFP has appointed a university academic Prof. Rohana Lakshman Piyadasa, who is not a politician and who has no known political experience as Acting General Secretary? Don’t you think that this is foolish?
A: You are wrong there. Despite his not being in Parliament, he has been in active SLFP politics.  He has been in the university system and  been active in student politics, while at university.

So, will all these temporary appointments as office-bearers be permanent?
A: That will be something that would be determined in the future. We will see how it goes.
Now coming back to the contentious allegation against you, that  you took over aRs 1 million, from controversial businessman  Arjun Aloysius?  What would you say?
A: It is indeed a good thing that you brought this in the open.  At the time, that these allegations refer to, I was the Chief Minister of the North Western ( Wayamba)  Province.   I was not a Member of Parliament or a Member of COPE at that time. The nominations were called from 6 July to 13 July 2015. 13 July was the day that the nominations were closed.  That was the day that this so-called Rs 1 million cheque which is being queried was cashed. The COPE Committee, of which I was a member commenced on 8 June 2016. That was after nine months into this Government.  I as a COPE member, acted stringently against all the offending members of the Bonds scam. But, with that said, Arjun Aloysius and his father Kattar Aloysius are family friends of my father and I acknowledged that they have helped me at election times.

So, the money of Rs 1 million which is perceived as being given as a bribe, was given for the election campaign?
A: Yes. Otherwise, for what other earthly reason should he give me money?

Now, the Director of the Campaign for Free and Fair  Elections  (CaFFE)  alleges that there  have been 188  MPs  who have  been  offered money and  cheques by Arjun  Aloysius. You say 118. What is the truth?
A: This is a totally false story. There is no case of 188 MPs. It is 118  people  who have been allegedly bribed.  There is no confirmation that all 118 people are Members of Parliament. That is the truth. Amongst those 118, there could be others, such as MPs, Ministers, businessmen  and  others. Nowhere have it been stated that there were 118 MPs. There is also talk of 186 cheques. The distortion of the 118 MPs  has been made by the  media who has got it all  wrong.

UNP National Organizer and Minister of Plantation Industries Navin Dissanayake  also chaired a news conference and stressed that there were 118 MPs  who were  involved in this racket. Your comments?
A: Exactly. That is our position as well. The number 118 has been interpreted by the media which has become the problem now.

It is also alleged that the story or the canard of 118 MPs taking money from Aloysius was spread by you who is seen in political circles as a means to justify that you also took. Why?
A: That is also a false report.  My political opponents made out a case in Court claiming that I am also involved in this in naming and shaming in which they attempted to destroy me politically. The CID presented the facts to Court. I also told Court that this was a cheque, which was given for election campaigning and that it was a cash cheque and it was not written in my name. It was also not cashed by me. The cheque was given to me by one of my close friends but the cheque may have been given to him by Aloysius. Also, I did not receive direct favours from Aloysius.
Then Minister Ranjan Ramanayake has told Court that Yasantha Kodagoda had told him of various details. I was the Chief Minister at the time I   got the cheque but I acted fearlessly to bring the culprits to book. What happened in the interim was that the UNP attempted to destroy me politically and the campaign boomeranged on them.

It is also said that you got the cheque in question cashed through your security.Your comments ?
A.  If it is a cash cheque, what does it matter who cashes it, whether  it is me, my   security or my driver?  There have been some instances  where I have asked my driver to  encash my cheques, as well. So, what is the  problem ?

You are wanted  by the CID. But you have not presented yourself.  Why?
A: I have been busy with Parliament proceedings and related work last week.  I will be going there.

The   Attorney General also said that there was no list of 118. Your comments?
A: Let him release the evidence. Then, we will show him the breakdown of the  118.

Are you still a member of COPE ?
A: Yes.

Do you feel that you have the moral right to sit on the COPE when you have such allegations of bribery and corruption?
A: This is completely wrong. Getting money for an election campaign is one thing, and sitting in the COPE are two different aspects. Or  according to  your thinking, there can’t be any MP who can sit in Parliament  if he / she  cannot get campaign money for  elections.

What is happening to the Bonds issue?
A: The Bonds issue has taken a different turn with a selected group being targeted and mud is being slung at them. What is wanted now is to find a correct method of determining who the culprits are and to bring them to book.  First, what needs to be determined is whether there have been any frauds or errors in the Primary Dealings. The Government is playing to the gallery based on the wants of some interested few.

So, what are you doing about it?
A: There will be some decisions that we will be taking soon.