In 1992, gunmen shot and killed a Colombian judge who was investigating a charge of murder conspiracy against the fugitive drug lord Pablo Escobar. The victim, the Associated Press reported at the time, was 38 year old Miriam Rocio Velez, one of Colombia’s faceless judges whose identities were kept secret to protect them from terrorists and drug traffickers in the troubled country. In 2000, seven years after Escobar’s death, the judge who signed the notorious drug lord’s arrest warrant in 1987 applied for political asylum in the US, claiming that she was still marked for death. In 1989, Colombia introduced ‘faceless’ courts to protect judges and witnesses from drug lords. In lieu of their signature, judges would write a code number on their opinions; the Bench sat behind one-way mirrors, their voices distorted by a special microphone. Judges travelled under armed escort. In response to Bogota’s efforts to prosecute narcotics cases in the early 1980s, the country’s drug mafia launched a campaign of terror against judges. Between 1979-1991, 278 judges were killed in cold-blood. That was Escobar’s Colombia. 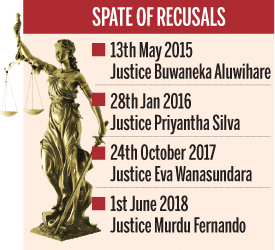 This is Sri Lanka in 2018, where the announcement by the decision of the fourth Supreme Court Justice hearing former Defence Secretary Gotabaya Rajapaksa’s case to prevent his arrest by the FCID and CID to recuse herself on personal grounds has sparked public debate.

The case was first heard on May 13, 2015 – more than three years ago. At that very first hearing, Justice Buvaneka Aluvihare declined to hear the case for personal reasons. The two remaining Justices, Sarath De Abrew and Eva Wanasundera took up the matter and granted interim relief to the petitioner Gotabaya Rajapaksa, preventing his arrest by the FCID and the CID.

Subsequent clarification was sought by the Attorney General on whether the relief precluded the former President’s brother from being arrested in any other case, and the Court specified that the order pertained to the MiG-27 procurement and misappropriation of state funds case to erect a memorial for his father D.A. Rajapaksa, alone. The cases are being investigated by the FCID and the CID.

That left Justice Wanasundera – the only Judge representing the original bench hearing the case.

The spate of recusals continued thereafter, when Justice Priyantha Jayawardane declined to hear the case when it came up in January 2016. Long intervals followed between the court dates and in October 2017, Justice Wanasundera’s became the third recusal to be recorded from among judges hearing the case.

With Justice Wanasundera’s recusal, not a single Supreme Court Justice who granted interim relief to Gotabhaya Rajapaksa and prevented his arrest in two cases for the past three years, remains on the Supreme Court bench hearing the case.

On June 1, the fourth Supreme Court Justice declined to hear the former Defence Secretary’s case, citing ‘personal’ reasons. Already delayed for three years, the case has been postponed by another five months, and will only be taken up again in November 2018. The case is yet to be taken up for argument, with various reasons cited by parties involved in the legal action.

It is unclear how much further this spate of recusals can go. While there is a vacancy on the court at present, the Supreme Court comprises Chief Justice and 10 Justices, while four have already declined to hear Gotabaya Rajapaksa’s petition.

A legal expert involved in the constitutional reforms process speaking to the Sunday Observer confidentially, explained how critical it was for the current system to be reviewed with provisions made available for similar circumstances. Appointing ad-hoc judges from the Court of Appeal was one option, the expert said. “If the trend continues, the Chief Justice would then have to discuss the matter with other judges and decide how to proceed.

The constitutional expert told the Sunday Observer that the remaining Supreme Court judges, who have not so far recused themselves, may be constrained to decide carefully whether any legitimate ground for recusal exists. “Even if such grounds exist, the Justices could consider whether any of the parties has any objection to the particular judge and if there is no objection, should hear the case without further delay,” the expert said.

Legal officers involved in the controversial litigation complain of ceaseless procedural delays with regard to the case as well.

“Each time the case comes up for argument, if judges are ready to hear petitioners, counsel for the petitioner says he wants to change the caption or the preliminary part of the plaint that lists respondents, since the composition of Cabinet keeps changing – and then the matter goes down again for six months,” a senior lawyer representing the Attorney General’s Department told the Sunday Observer, once again declining to be named.

The senior official at AG’s Department explained that where a Stay Order has been granted at the inception of a case as interim relief, the cases should not go down – or be delayed – for long. One lawyer representing the Respondents – in this case, also the FCID and the CID – told Court that preventing the arrest of the former Defence Secretary for so long has made it impossible to conclude investigations into the cases.

Legal experts point out that with regard to fundamental rights petitions filed under Article 126 (5) of the Constitution, the Supreme Court is obliged to hear and finally dispose of a petition or reference under this article within two months of its filing. “The Supreme Court has shown remarkable flexibility in regard to the two month rule; the question has also to be viewed in the light of the fact that the petition in question has been filed in the Supreme Court and a Stay Order has already been issued by that Court to prevent the arrest of a person for an alleged criminal offence in connection with which an investigation is underway,” a constitutional expert and a former member of the Judiciary said.

According to the Judicial Disqualification Resource Centre, Ground for Recusal, most commonly, such motions are predicated upon a claim that the judge is biased in favour of one party, or against another, or that a reasonable objective observer would think he might be.”.

Most experts contacted for comment on this article, declined to be named.

However, President of the Bar Association, President’s Counsel Udaya Rohan de Silva speaking to the Sunday Observer stated, if a judge decides to step-down from hearing a matter owing to personal grounds, such a decision is valid.

“During the tenure of former Chief Justice Sarath Silva he took up the position that even if a party to a litigation is known, that will not prevent a judge from hearing the matter, provided other parties do not object,” de Silva said.

Meanwhile, experts point out that Supreme Court Rules provide that even two judges can grant leave to proceed. But the rules are silent as to whether the two judges are sufficient to grant interim relief.

Some argue, they should not have granted interim relief that day, but referred it to a bench of three judges. Others argue, the case can be heard and relief granted by even two judges, as the rules do not specify otherwise. Nevertheless, three years spent on such a case without it being taken up for argument, raises the question whether these delays amount to a grave denial of justice.

“This may be the strategy of the petitioner and his lawyers, but whether the Court should allow the judicial process to be used to achieve this end is another question,” the former member of the Judiciary argued. “The Supreme Court is accountable, as are any other courts, to Parliament, in regard to the discharge of its functions, and in any event, all incumbents of power, whether legislative, executive or judicial, exercise power subject to public trust,” he said.

The fact remains that VIP or high profile persons being investigated for serious crimes are able to obtain different types of relief from the judicial system. A spate of fundamental rights actions have resulted in several orders preventing the arrest of senior officials linked to the previous administration, including former RADA Chairman Tiran Alles and former IGP Jayantha Wickremaratne.

Over a decade ago, the Supreme Court in a case involving the Petitioner’s brother then presidential candidate Mahinda Rajapaksa, went so far as to stop a criminal investigation. The Chief Justice who headed the Bench that pronounced judgment in this famous case ‘Helping Hambantota’ has already made a public apology after his retirement.

Mahinda Rajapaksa was elected President a few months after, and the case involving the misappropriation of millions in tsunami aid, was never solved.

If delays continue at this pace with regard to the Gotabaya Rajapaksa Vs. FCID case, arguments and a decision could extend well past the next presidential election. As counsel for the investigators stated in submissions to the Court, investigations into the case are already in limbo. If the case is not heard – and soon – the cases may never see resolution and prosecution.

Speaking at an anti-Tobacco event on June 7, outspoken Government Spokesman and Health Minister Dr Rajitha Senaratne addressed the issue in his remarks.

“Judges have been known to recuse themselves in numbers in cases involving South American drug mafias,” the Minister said. “What fear drives recusals in Gotabaya Rajapaksa’s case?” he questioned.