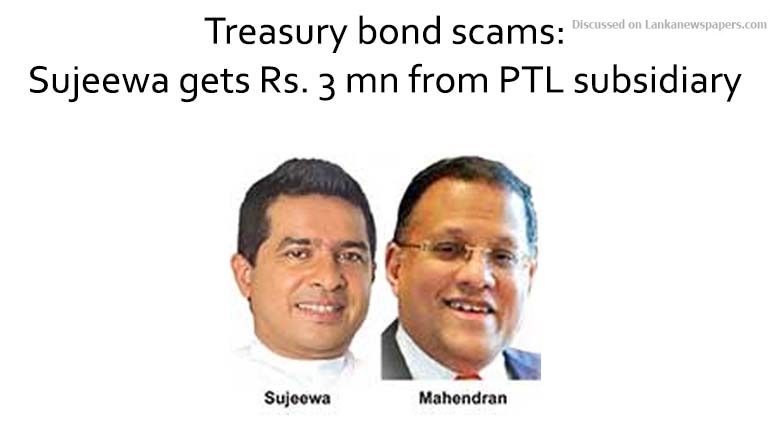 W. M. Mendis has been named the third accused in the treasury bond case.

The court was told that of the three cheques received by Senasinghe, two had been encashed by his police bodyguards and the other by a person involved in his political work.

Senior Additional Solicitor General Yasantha Kodagoda told the court that Senasinghe would be called by the CID to record a statement.

Kodagoda said that UPFA MP Dayasiri Jayasekera, who had received Rs. 1 mn from Walt Rowe and Associates in July 2015 had yet to report to the CID to make a statement though he had been asked to do so.

Cheques received by Mahendran had been encashed by a peon identified as Gamage Roshan Sanjeewa in January, April and May, 2016 and the funds used to settle the then Governor’s credit cards bills, his Secretary Amila Dissanayake was quoted as having told the investigators.

The court was also told that documents related and useful to the investigation, were recovered from the PTL office during recent search, carried out on a judicial directive.

Revealing that four laptops containing very important information, other equipment and three hand phone numbers had been found, Kodagoda said that the PTL had used the National Identity Cards of its employees

to obtain SIM cards given to those who provided vital information to the company.

Kodagoda said that PTL owner Arjun Aloysius and its CEO Kasun Palisena had so far heeded court directive given on March 15, 2018 to furnish their asset declarations.

President’s Counsel Kolitha Darmawardena, who represented W.M. Mendis company told court that his client had received money from PTL to settle Rs 700 mn owed by the company due to the construction of a distillery at Kalkudah.

Darmawardena said that his client was facing major crisis as its employees and customers were being investigated.

The PC said that his client had paid Rs 32 bn in taxes during the past eight years.

Having remanded Arjun Aloysius and Kasun Palisena, second and fourth accused, respectively, the magistrate directed the CID to conclude the investigation as soon as possible as they could not be kept in remand custody indefinitely.