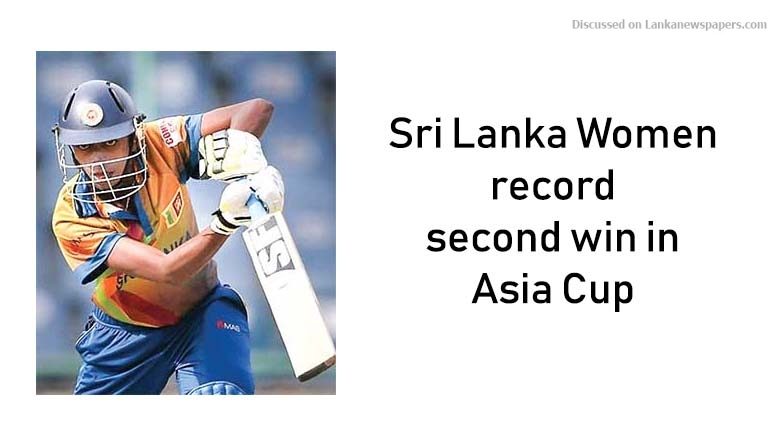 Opener Yasoda Mendis top scored for Sri Lanka Women with 36 runs off 29 deliveries with four boundaries and a six as they overcame Malaysia Women by 90 runs to record their second win in the ongoing Asia Cup tournament in Kuala Lumpur yesterday.

Sri Lanka Women overcame hosts Malaysia by 90 runs to record their second win in the ongoing Asia Cup tournament in Kuala Lumpur yesterday. The Sri Lankan side had defeated Bangladesh in their opening game of the competition on Sunday. Put into bat, Sri Lanka posted 136 runs for three wickets in their 20 overs and restricted Malaysia for 46 for seven in 20 overs.

Openers Yasoda Mendis and Nipuni Hansika added 59 runs for the first wicket in 58 ball to give a solid start. Mendis top scored with 36 runs off just 29 deliveries with four fours and a six while Hansika faced 37 deliveries for her 20. She hit one boundary before being run out.

Rest of the batting provided the impetus needed after a solid foundation. Anushka Sanjeewani slammed less than run a ball 26 with three boundaries while Hasini Perera finished with an unbeaten 32 that came off 27 deliveries. She hit four boundaries.

Malaysia were never in the hunt losing wickets at regular intervals. The hosts could score just five runs in the mandatory Power Play of six overs.

Christina Baret top scored for them with 14 runs. Seamer Nilakshi de Silva finished with three for 13 in her four overs that included a maiden. Skipper Shashikala Siriwardene claimed two wickets.

Sri Lanka take on Pakistan on Wednesday.Their remaining two group games against India and Thailand will be played on the 7th and 9th of June respectively.

The top two teams of the six nation competition will play the final on Sunday in Kuala Lumpur.

India are the tournament favorites.