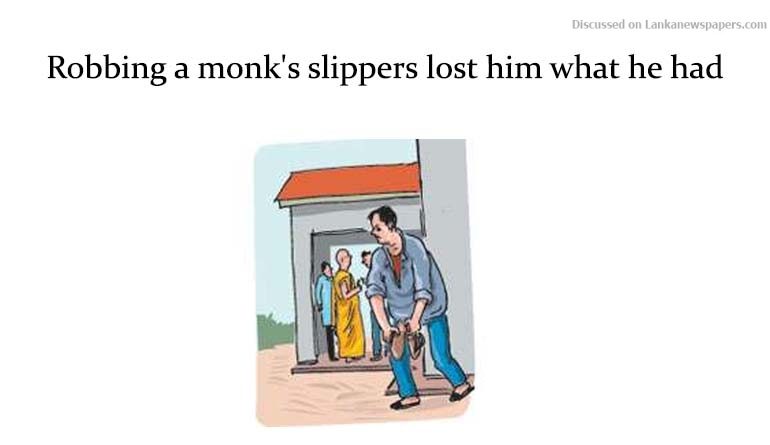 A man, who had visited the Gampaha District Secretariat to get his father’s gun license transferred to his name, had taken away a pair of slippers belonging to a Buddhist monk who was delivering a sermon (bana) at the District Secretariat premises at the time, after getting irritated as he was forced to wait till the sermon concluded to get his work done.

The man had hidden the pair of slippers under his clothing and gone away in anger.

After the conclusion of the sermon, the staff of the District Secretariat had been faced with a dilemma as they were unable to find the monk’s slippers. The authorities looked at the CCTV footage and saw an outsider leaving the premises with the slippers belonging to the monk who had come to deliver the sermon.

When the man returned the following day to get his transfer done, he was immediately recognised by the security at the DS office as the one who had taken away the monk’s slippers and the police were informed about it.

He explained to police that the reason for his curious action was that he was irritated about the delay in getting his work done by the DS staff.

After hearing the reason for him to fly off the handle the authorities were of the opinion that if such a minute thing had caused this individual to get angry and do what he did in retaliation, then what guarantee did they have that handing over a gun license to him would not have bad repercussions for others that got in his way.

As a result they refused his request to transfer the gun license to his name and instead requested the police to confiscate the weapon.