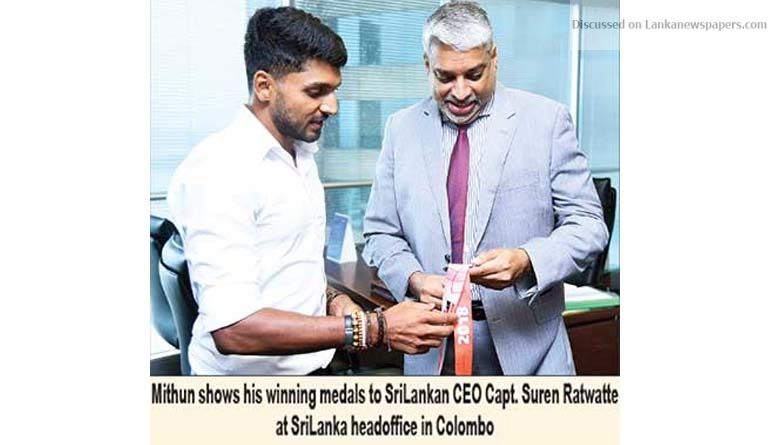 SriLankan Airlines continues to support Ironman Mithun Liyanage, who has qualified for the prestigious 2018 Ironman 70.3 World Championships in South Africa in September 2018 with an impressive performance at Ironman 70.3 Vietnam held on 13th May.

Captain Suren Ratwatte, CEO of SriLankan Airlines, said: “Mithun is demonstrating his true potential as a world class triathlete and has now been rewarded by being selected to participate in this global event. As the National Carrier, SriLankan Airlines endeavors to identify and support our homegrown talent, and we are proud to have played a role in supporting Mithun on his journey. We wish him the best of luck in South Africa.”

SriLankan Airlines has long supported the country’s sportsmen and women in international competitions, and also helped to organize many types of international sports events held in Sri Lanka. The National Carrier has been supporting Mithun since 2016.

Mithun Liyanage said: “I am delighted to have qualified for the World Championships and would like to thank all those who supported me in many ways, including my coaches and colleagues, family and of course all my sponsors, including SriLankan Airlines. I hope that this will encourage the growth of Triathlon among Sri Lankans, who definitely have the potential to go far in this sport.”

Mithun is one of four Sri Lankans who have qualified for the World Championships be held in Nelson Mandela Bay near Port Elizabeth in South Africa on September 1-2, where over 6,000 of the world’s finest triathletes are expected to compete.

Mithun, 31, began competing in Ironman Triathlons just two years ago, training twice a day. He was chosen as an All World Silver Athlete, which honours the top 5% of triathletes in his age group of 30-34 years. A Marketing professional, he is currently Sales & Marketing Manager at Spinner Sri Lanka and holds BSc in Information Technology from the University of Portsmouth and an MSc in Marketing from Asia e-University. He is a brand ambassador for Trek Bikes, a member of the Triathlon Club Colombo, Wroom, Colombo City Running, and was involved in the organizing of Ironman 70.3 Colombo earlier this year.