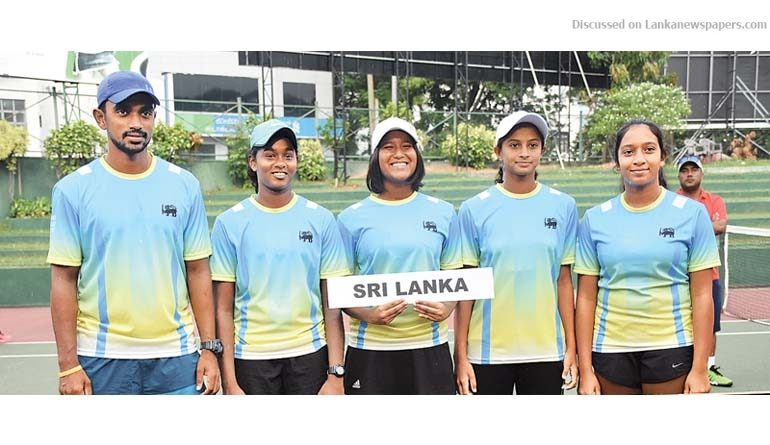 ri Lankan Junior Fed Cup team registered their second clean sweep victory in the Asia/Oceania Pre-qualifiers when the beat Vietnam in a convincing fashion 3-0 in a Group ‘A’ tie at the Sri Lanka Tennis Association (SLTA) courts yesterday.

The Lankan lasses won their opener against Maldives by a similar margin on Tuesday and lead Group ‘A’ with two wins.

Significantly Lankan girls showed much promise to win all three matches of their tie against Vietnam in straight sets. The Lankan lasses left no room for their Vietnamese opponents to pose a threat and dominated all three matches from the start to finish.

Anjalika Kurera beat Thi Phuong Nguyen 6/1, 6/0 in the first singles and her teammate Savini Jayasuriya had no trouble in defeating Minh Thuy Hang Nguyen 6/0, 6/3 in the second singles. Anjalika and Oneli Perera routed Minh Thuy Hang and Diem Ngoc Tran 6/0, 6/2 in the doubles.

Today will be a rest day for Lankan Fed Cup team and they will be seen in action on Friday’s Play-off tie.

Mongolia had the better of Lebanon beating the latter 2-1 in Group ‘B’ and Singapore recorded a clean sweep win over Philippines (3-0) in Group ‘C’ at the same venue in yesterday’s Junior Fed Cup Asia/Oceania Pre-qualifiers.

Vietnam Junior Davis Cup team broke Sri Lanka’s winning streak when they beat the hosts (2-1) in yesterday’s Group ‘D’ Asia/Oceania Pre-qualifier at the SLTA courts. It was Sri Lanka’s first defeat in the tournament having won both ties they played earlier against Saudi Arabia and Tajikistan in convincing fashion.

Chathurya Nilaweera fought a tough battle in the first singles against Vietnam’s Le Khanh Duy Tu and earned the only victory of the tie winning in a three-setter (7/5, 1/6, 6/2). Kavisha Ratnayaka was defeated by Thai Nguyen Tat 0/6, 4/6 in the other singles match. Chathurya and Kavisha recovered from a first set defeat to win the second set in their doubles match against Tat and Quang Truong Tran, but conceded victory to Vietnam retiring in the third set (4/6, 6/3, 2/10). Sri Lanka will play their first play-off today against Syria.