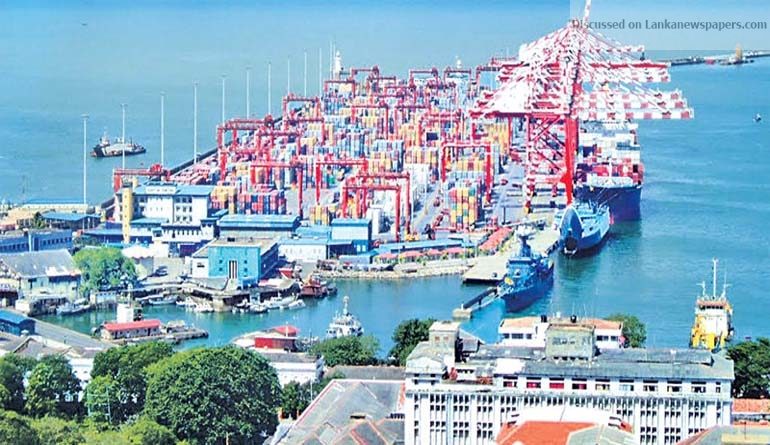 The terminal operators of Colombo Port yesterday made a bid to improve its efficiency by signing a landmark Memorandum of Understanding to (MoU) to unload excess ships of their competitors if berths are available, reducing waiting time for clients.

The agreement, which was signed in the presence of Ports and Shipping Minister Mahinda Samarasinghe, seeks to improve Colombo’s competitiveness by reducing the time ships would have to wait outside the port to be unloaded. Minister Samarasinghe was optimistic that this would increase TEU volumes and raise the port’s rankings. Colombo Port is currently ranked 23rd in the index of top 50 global ports, he added.

“Colombo Port has always done well, far beyond its South Asian competitors, but we need to keep encouraging this performance. The previous practice was that if one terminal is busy, then the ships that are contracted to it have to wait in line. This lack of coordination makes the port less competitive, so we decided that it would be better if all three terminals came together, and when a berth is free they would unload even their competitors’ ships,” the Minister said.

A major international publicity campaign is expected to follow the MoU, to update the global shipping industry of the new development, and encourage them to increase business with Colombo Port. Separate agreements on payment structures are also to be drawn up between the three terminal operators, State-owned Jaya Container Terminal, South Asia Gateway Terminal and Colombo International Container Terminal.

“There are instances when the berths are idle, even though there are ships outside the port. This sends the wrong message about the efficiency of the Colombo Port. This MoU is to ensure that we try to share our resources, to provide our clients with the best possible services. Collectively, we have the responsibility of attracting more business to the port, which means we have to go beyond our competitors, and improve the quality of the service we provide,” Sri Lanka Ports Authority (SLPA) Chairman Dr. Parakrama Dissanayake said.

He compared the stakeholders of the industry to a shipping alliance, and insisted that as much as they were competitors, they also had to cooperate to improve the collective sector.

SLPA-owned Jaya Container Terminal grew 24.8% in January and 25.2% in February, he added. Both the Minister and the SLPA Chairman were warm in their praise of the Port’s financial performance, recapping the earnings and growth percentages of previous years. Minister Samarasinghe also stated that a Cabinet paper was being drawn up for the East Container Terminal, which would be fully owned by the State, and that they also plan to upgrade Jaya Terminal so it could offload two ships at the same time. The Ministry would work to fast-track the project, the Minister reiterated.

“We are not against liberalisation per se, but there are local companies that are doing a great job, but over the years they have been investing a lot of the profits they have earned back into the business, and they provide top level service. If anyone wants to come and get into that business, then we believe we should show their bonafides by bringing in a foreign direct investment. Let them underscore their commitment by bringing in a minimum level of investment we will stipulate. The Finance Ministry and our Ministry will be working together with the stakeholders, as per the Cabinet decision that was taken recently, and we will come to a consensus on the level of investment. If anyone wants to bring that level then we are open to them,” Samarasinghe said.

The Minister has so far stuck to his guns on the liberalising move, emphasising that it would be impossible unless he signs the relevant Gazette notification. The remaining $580 million of the Hambantota Port deal would be handed over to the Government on 9 June, with an additional $146m to be parked in a local account, to be used to develop the venture as Foreign Direct Investment (FDI).

“Colombo does compete regionally for the business that we have, we are very dependent on transshipment cargo, and therefore it is essential that Colombo develops the ability to handle more and more cargo. We have every intention of growing in Colombo and are happy that this is an opportunity to take that forward,” said SAGT CEO Romesh David, speaking shortly after the MoU signing.