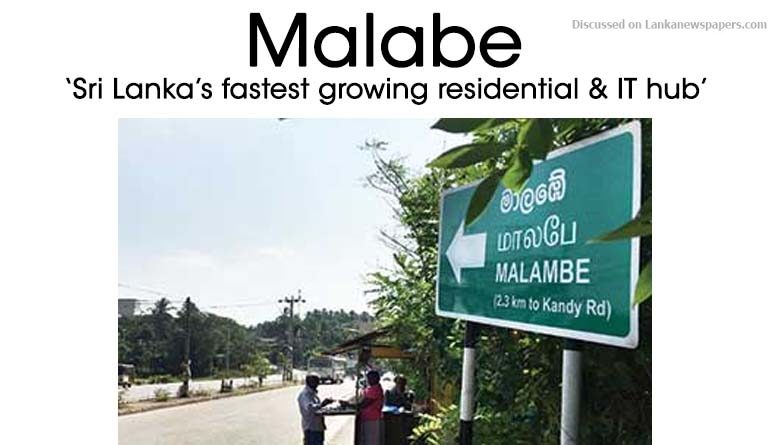 Malabe is a suburb of the greater Colombo area, in the Colombo district, Western Province of Sri Lanka. A predominantly residential area Malabe is now rapidly expanding into an information technology and higher education hub in the Greater Colombo area. Malabe lies in close proximity to both Colombo, the financial capital of Sri Lanka and Sri Jayawardanapura Kotte, the administrative capital hence the large residential population

Part of the ancient Sri Lankan Kingdom of Kotte during the 15th century and is believed to encompass the greater part of the now unidentifiable Mulleriya Basin which was a lush wetland where the Battle of Mulleriyawa between the Portugese and the Sinhalese kingdom took place resulting in an annihilation of the Portuguese forces at the hands of King Rajasingha.

Malabe has become part of the upscale residential boom of the Jayewardenepura Kotte area during the past decade. Placed in a central position Malabe offers easy access to Colombo via Rajagiriya, direct access to the neighboring administrative capital, Sri Jayewardenepura Kotte, to other financial hubs such as Nugegoda and Maharagama, adjacent residential hubs of Pelawatta and Thalawathugoda, easy access to Kelaniya, and Orugodawatta via the Low-Level Road which contains most of the shipping container yards in Colombo. Also Malabe is just adjacent to the Balarama Free Trade Zone home to many industrial manufacturing facilities but proximity is so that the factories have no effect on the residents of the area.

Main healthcare provider for the area is the Government Teaching Hospital located on the Chandrika Kumarathunga Mawatha, The Neville Fernando Teaching Hospital. Malabe also has numerous private dispensaries and laboratories.

Over the past decade Malabe has become one of the most sought after residential suburbs in the Greater Colombo area. With the rapid development of the roadways in the area and the proximity to major financial and administrative hubs of Sri Lanka the land value is as competitive as ever now. Property prices for an average 3-bedroom house range from 22million where as it was 20million last year. The land prices are also on the rise with 800,00 per perch comparing to the price tag of 600,000 previous year.

Malabe as a center point in the suburban areas has a complete public transportation system with major bus routes (177, 993, 336) going across or beginning from the center of the and some buses connecting Malabe to the Central Bus Terminal in Fort, Colombo. The road that leads to Colombo which is only 14km away via Rajagiriya to Borella junction is also one of the few roads in Colombo to have the Bus Priority Lane. The government plans to implement a light passenger railway connecting Malabe to Colombo soon as well. Under the MegaPolis Development Project undertaken by the government a light commuter train which will run above ground parallel to the Rajagiriya main road is planned to be built from Malabe to Borella thus reducing the traffic and making access to Colombo more commuter friendly. Already the feasibility studies are underway, and the designs have been put forward for consideration.

The government plans to implement a light passenger railway connecting Malabe to Colombo in the near future as well. Under the MegaPolis Development Project undertaken by the government will commence construction in early 2018 is scheduled to be completed by the end of 2021. The total distance covered will be 21 kilometers from Malabe to Fort. Average travel time will be cut down to roughly 40minutes from Malabe to Fort with trains being operated every 4 minutes during the peak hours in the morning and afternoon. The light commuter train which will run above ground parallel to the Rajagiriya main road thus reducing the traffic and making access to Colombo more commuter friendly. Stations will be put in place at Fort Station, Western Province Transport Centre, St. Joseph’s College, National Hospital, Borella, Cotta Road, Welikada, Rajagiriya, Sethsiripaya, Battaramulla, Palan Thuna, Robert Gunawardana Mawatha, Lumbini Temple, Talahena, Malabe, and the IT Park.

This will be the 1st phase of a larger network which will extend to Homagama, Kelaniya and Moratuwa.

Already the feasibility studies are underway and the designs have been put forward for consideration.

Malabe is home to a multi ethnic multi religious populous with the majority being Buddhist. Many places of worship can be found around the city including the Mahamewna Temple which is located in Pittugala and the Historic Korathota Temple. Malabe is also home to many churches kovil’s and mosques.

Malabe has been proposed as the Information Technology Hub as per the Mega Polis Development Project of the government. Already many reputed IT companies, including the Millennium IT owned by the London Stock Exchange have established their head office in Malabe, with many more companies planning use Malabe as their home base. This brings about a golden opportunity for present and potential employees of these companies choose Malabe as their place of residence due to the immense convenience of having a very small commute to the workplace daily. – Lanka Property Web