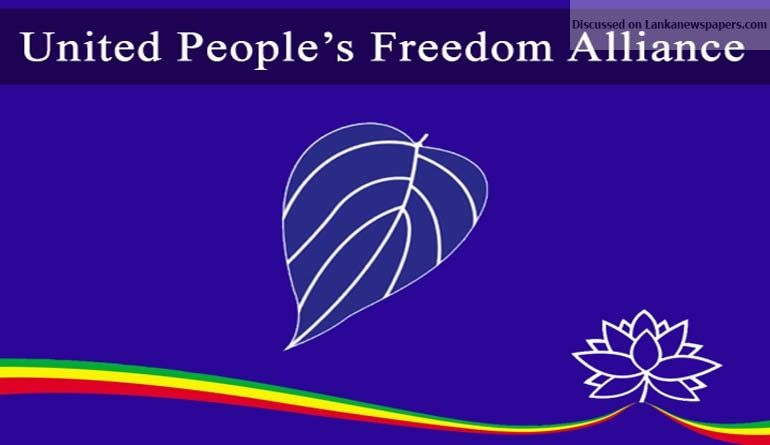 The United People’s Freedom Alliance (UPFA) has informed President Maithripala Sirisena on Sunday night that it would quit the national government, a party official said.

UPFA General Secretary Mahinda Amaraweera sent a letter in this regard to the President. The unity government was formed between the UPFA and the United National Party (UNP) soon after the 2015 parliamentary election in order to govern the country for a period of two years that ended in December last year.

UPFA MP, Sports Minister Dayasiri Jayasekara told Daily Mirror that his party had also requested the President to make a reference to the Supreme Court seeking its opinion on the possibility to appoint a new Prime Minister in place of UNP leader Ranil Wickremesinghe who serves in office at the moment.

According to the 19th Amendment , once a Prime Minister is appointed, the only way in which he can cease to hold office is in terms of Article 46(2) if he (a) resigns his office by a writing under his hand addressed to the President; or (b) ceases to be a Member of Parliament, or if the Cabinet of Ministers is dissolved in terms of Article 48(2) pursuant to the Statement of Government Policy or the Appropriation Bill being defeated in Parliament, or upon the passing of a motion of no confidence against the government.

However, some legal experts argue that the entire Cabinet is rendered illegal once the two parties part ways from the national unity government. Therefore, they say the President has the power to take steps for the appointment of a new Cabinet thereafter, including the Prime Minister.

The President has been asked to seek the opinion of the Supreme Court over this ambiguity.

Meanwhile, it is learnt that the President had shelved the idea for the prorogation of Parliament. Initially, his office had informed MPs that such a move was on the cards and the President was thought to have sent his proclamation to the Government Printer. It was later recalled.