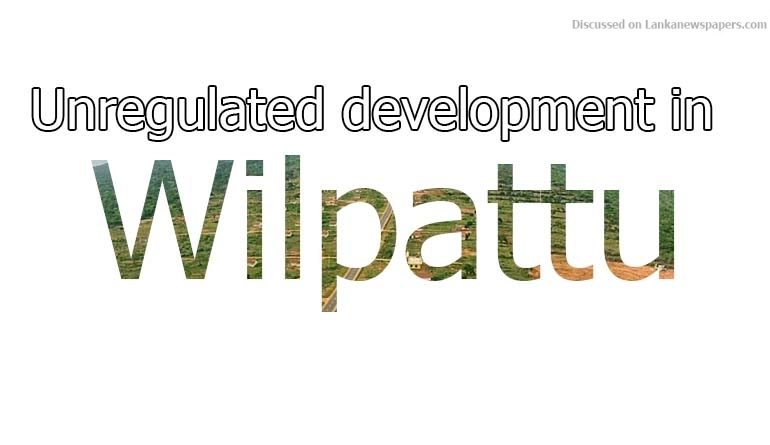 The Court of Appeal yesterday issued notices on the Department of Wildlife Conservation, the Bishop of Chilaw and two others returnable for 6 March.

The bench comprising justices P. Padman Surasena (CA President) and Shiran Gooneratne issued notices sequent to a writ petition lamenting the alleged clearing and disturbance caused to the Wilpattu National Park (WNP) and unregulated development activities as well as human intrusion for the festivities of a small jungle Catholic shrine in the Pallekandal/Pomparippu area of the Wilpattu National Park.

Public interest litigant voluntary bodies, the Environmental Foundation and Wildlife and Nature Protection Society of Sri Lanka blames that these activities are still continuing inside WNP contrary to law and procedure with the knowledge or permission or tacit approval of the Director General of Wildlife Conservation M.G. Suriyabandara and Minister of Sustainable Development and Wildlife Gamini Jayaewickrema Perera, who were cited as respondents along with the Minister of Christian and Parliamentary Affairs W. Milroy S. Fernando.

Petitioners state that the said shrine was built over a few centuries ago with a small chapel in an area less than a quarter of an acre and eventually used for an annual feast for the fishing communities residing around the Puttalam lagoon.

They state that the fishing communities used to visit the shrine once a year for an annual feast and stay overnight in temporary shelters next to the chapel until the feast is over.

Thereafter these shelters were dismantled at the end of the feast and the chapel normally went to disuse until the next annual feast, they say.

They also state that during the war period, this chapel went into disuse and the building fell into disrepair, with the roof caving in and they were unable to trace any accurate records of the said church conducting or engaging in religious activities in a regular manner until the recent past and it was never operated on a greater scale rather than the said annual feast.

They bemoan the expansion of festive activity relating to the church has been rapidly increasing due to the easy unregulated access to WNP, after the construction of the alleged unauthorised/illegal road cutting across the national park with the intervention of a politician who has vested interest in the area.

They allege the structural expansion, new constructions, development activities, erecting construction of roads had been done by clearing the scrub land or forest cover of WNP in contravention of the Fauna and Flora Protection Ordinance.

They point out that these are areas previously used by herds of elephants, which traditionally grazed on the grasslands of Pomparippu Plain within the national park which is among the top national parks world renowned for its leopard population with nearly 60 lakes.

They allege that the increase in the unlawful or unregulated activities under the guise of traditional practice, usage and custom are rapidly increased mostly proclaiming religious festivities inside a national park is mostly due to non-transparent practices.