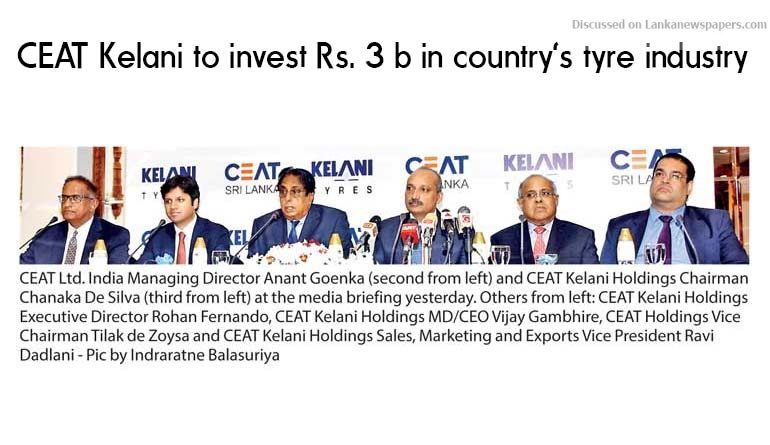 CEAT Kelani Holdings yesterday said they had finalised an infusion of Rs. 3 billion in new investments over the next two years for the enhancement of manufacturing capacity, new product development and the growth of exports, in a significant vote of confidence of the prospects for the India-Sri Lanka joint venture tyre manufacturing operation.

The investments, 30% of which will be made up of internal funds while 70% will comprise borrowings, will see the establishment of a state-of-the-art plant in Kelaniya for the manufacture of Truck Bus Radials (TBRs) and the expansion of the existing cutting-edge passenger car radial tyre plant at the same location, CEAT Kelani Holdings Chairman Chanaka de Silva told the media at a news conference in Colombo yesterday.

“This new investment is part of CEAT Kelani’s Investment Master Plan in Sri Lanka and is projected to generate a substantial increase in turnover over the next three years from Rs. 10.5 billion in 2016/17,” de Silva added.

It was pointed out that the 20-year-old joint venture’s cumulative investment in Sri Lanka to date totalled Rs. 5 billion.

He said that the first ever domestic production of TBRs in Sri Lanka will lead to noteworthy import substitution, substantial saving of foreign exchange, the transfer of the latest international knowhow and technology for the manufacture of this category of tyre, and the launch of TBRs designed and built for local conditions.

New machinery already on the way from Europe, when commissioned circa June-July 2018, will commence the production of TBRs. The company also plans to double CEAT Kelani’s Passenger Car Radial (PCR), Van and SUV radial tyre production from a current 500,000 tyres a year to 850,000 a year. In addition, it is expected that the firm’s motorcycle tyre manufacturing capacity, currently at 375,000 tyres a year, will also double as a result of the investment, de Silva emphasised.

Acknowledging that the business has been growing and they had more confidence to do business in Sri Lanka, he said the sourcing of raw materials, particularly rubber, was becoming challenging.

CEAT Ltd. India Managing Director Anant Goenka and CEAT Kelani Holdings Managing Director Vijay Gambhire joined their fellow directors of the joint venture, one of the most successful ventures benefitting from the Indo-Lanka FTA, at the announcement of the new investments.

Commenting on the progress of the joint venture in Sri Lanka which completes 20 years, Goenka said: “Our focus now is on taking the extensive portfolio of Sri Lanka-made tyres to the next level in terms of performance specifications and attributes, to keep pace with product developments in highly developed markets. CEAT India has already gone down this road and CEAT Kelani enjoys the benefit of our technological knowhow and market experience.”

Noting that the CEAT brand currently accounted for nearly half of the country’s pneumatic tyre requirements and exports about a third of its production in Sri Lanka, Gambhire said its  market share in the PCR segment was steady at 32% and it enjoys a 51% share of the market for Truck and Light Truck (TLT) tyres.

“The rapid radialisation of the commercial tyre segment in Sri Lanka makes us confident that this is the ideal time to invest in the expansion of production capabilities,” he added.

The brand has also cornered 54% of the Three-Wheeler segment, 23% of the motorcycle segment and 72% of the agricultural tyre sector. CEAT Sri Lanka exports to 15 countries in South Asia, the Middle East, Africa and the Far East.

With part of the investment for radials going into upgrading tyre-building equipment and techniques, new tyre presses, upgrading compound mixing technology and international-standard machinery and technology, CEAT will continue to enhance its capabilities in the manufacture of high-end premium radial tyres for the SUV and luxury vehicle segments, move up the value chain in the radial category and double market share in the segment, Gambhire asserted.

The company also plans to increase its focus on developing products based on functional and performance platforms such as fuel-saving, long tyre life and premier performance.

In the motorcycle tyre segment, CEAT Kelani currently manufactures 33 sizes that fit the majority of popular models including high-performance superbikes. These tyres are manufactured at a state-of-the-art plant commissioned at the company’s Kelaniya complex in 2015. Part of the Rs. 3 billion investment is intended to upgrade manufacturing technology for these tyres while doubling capacity.

CEAT Kelani’s manufacturing operations in Sri Lanka encompass the radial, commercial, motorcycle, three-wheeler and agricultural machinery segments. CEAT Ltd. is the only tyre company in the world outside Japan to receive the prestigious Deming Prize in 2017. The Deming Prize reinforces and consolidates CEAT’s reputation as a high quality producer of tyres and enables the company to gain preferred partner status for leading automobile companies in the world.

One of the highest international awards for Total Quality Management (TQM), the Deming Prize fetes both individuals for their contributions to the field of TQM and businesses that have successfully implemented TQM. It was established in 1951 to honour W. Edwards Deming who contributed greatly to Japan’s adoption of statistical quality control after World War II.