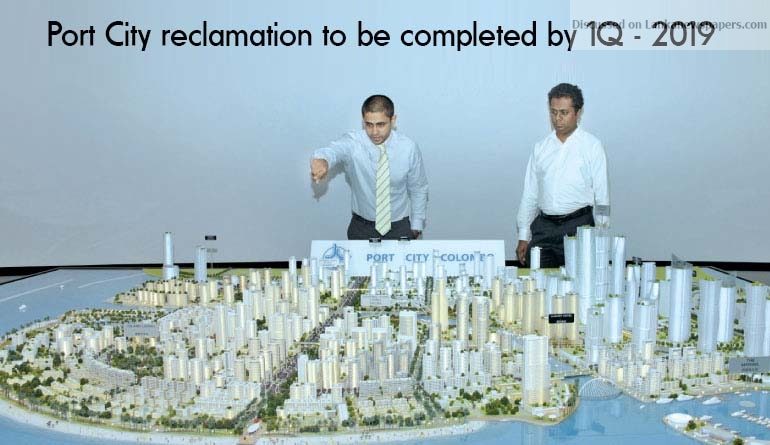 Close to 63 percent of the 269 hectares of land that would constitute the Port City Colombo, currently under construction has already been reclaimed from the ocean, and reclamation of the total area is expected to be completed by the first quarter of 2019, said Thulci Aluwihare, Head of Strategy and Business Development, for the project company.

“We are on schedule. The 269 hectares is divided into residential, office, hotels, and theme parks and in addition to that there is a proposed international school, hospital and a convention center planned within Port City. So it wouldn’t be wrong to say that this would be a city within a city that provides an integrated living experience.”

He says that since the project is a Public Private Partnership (PPP) with the Government of Sri Lanka, a proper market study will be commissioned prior to developing the strategic plots i.e. the school, health care plot (hospital) and the convention center.

“This is because we need to position first, to understand the kind of demand and travelers who would arrive here and gain a proper understanding of the MICE industry before we decide on the capacity for these facilities. There would be a 2 kilometer stretch of artificial beach, Colombo’s first yacht Marina, and approximately 300 meters’ width from the beach and the breakwater made up of shallow water for swimming, water sports etc.”

“The entire area is separated into 5 precincts-districts. One is the financial district which would be around 40 hectares in size.”

The project company plans to break ground for the construction of the Colombo International Financial Center building complex by the second half of this year.

It will be done in two phases and the total estimated investment would be US$ 1 billion, which will be split between the first and second phases of the development.

We conducted an international architectural competition in the latter half of last year and selected US firm, Skidmore, Owings & Merrill (SOM), to do the architectural design for the financial district.

“Currently it is in the design stages and it will be a mixed use development i.e. office, residential and retail.”

“Of the 269 hectares of the Port City, over 90 hectares is just open spaces or common area. Building orientation has been considered for wind and light and there are height zoning laws governing the height of buildings” said Aluwihare.

In addition to that our Master Plan includes DCR (design control regulations); which any developer who wants to build in the city would be required to comply with. DCR in four volumes includes; urban/town planning, utilities, landscapingand sustainability guidelines have to be adhered to and although a certain amount of flexibility would be allowed, it would be within these parameters so that the look, feel or stature of the Port City is not compromised in any way,” says Aluwihare.

In terms of day to day maintenance and management of the Port City, Aluwihare says that an estate management company would be set up under the tripartite agreement. It would be jointly managed between the Government and the Project Company.

“The total built up area of the Port City is 5.65 million square meters of GFA (gross floor area). The local demand alone would not suffice in filling this; our vision is to build a world class city for South Asia, so how do we attract people to come and live and do business here? The Government has come forward to set up the Colombo International Financial Centre within the Port City, to form business friendly policies to attractbusinesses to set up in Port City. We need to understand that Sri Lanka is not the only girl on the beach, there is competition around us. However, with the right infrastructure supported by business friendly policies of the Government, we have the opportunity to promote FDIs, export of services and ease of doing business” says Thulci Aluwihare.

He says that this is a great opportunity for Sri Lanka to leapfrog, and regain the lost momentum postcivil war.