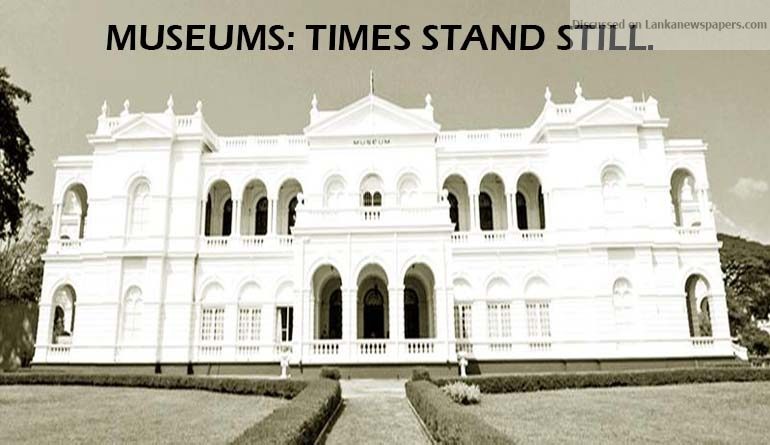 The heritage of Sri Lanka stretches over many millennia with huge collections of artefacts dating back to the Pre-historic period (Stone Age). According to scholarly research, the chronology of the Palaeolithic (early phase of the Stone Age) and Mesolithic (middle phase of the Stone Age) periods of Sri Lanka could be identified as the cultural sequence from about ca. 130,000 to 1,800 BC. Moreover, it is evident that the country has human cultural heritage (Mesolithic) extending to ca. 34,000BP-1,800BC, and there is an unbroken cultural sequence from the prehistory to the contemporary period adding more culturally valuable objects to the archaeological artefact collection in the country.

Since the end of the nineteenth century, museums generally had been on the rise in Europe and elsewhere, not least as a consequence of developments in the fields of history and archaeology, and this museum proliferation occurred in Sri Lanka too, with various types of museums gradually being established all over the country. As a result, most of the movable artefact collections are stored, preserved and displayed in various kinds of museums scattered throughout the country under different public and private administrative agencies.

This is a good sign for cultural heritage preservation and to improve tourism industry in the country at a situation where we are experiencing limited archaeological activities, excavations, explorations and restorations, due to various reasons. However, it could be seen that there is no uniform, customary or scientific basis of storing, preserving and displaying of objects in those museums in the country. 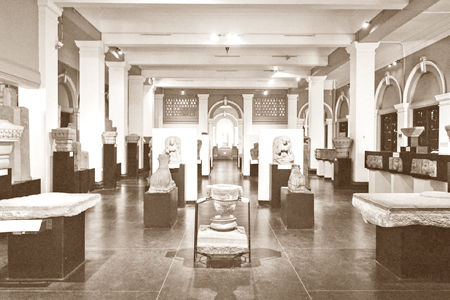 The current trend of ramification of museums with various public as well as private collections leads to establishment of museums largely conforming to their owners’ perspectives, positions or purposes, rather than to accepted norms of museums. However, no-one can oppose their activities because the word ‘museum’ is not legally protected in Sri Lanka, or elsewhere. Meanwhile, leading public museums in Sri Lanka are managed by three governmental bodies, namely, the Department of National Museums, the Department of Archaeological Survey of Sri Lanka and the Central Cultural Fund of Sri Lanka. The other museums in the country are administered by different public authorities such as universities, other government institutions, provincial councils and district authorities etc. in addition to private organisations and individuals.

The Royal Asiatic Society (Ceylon Branch) wanted to establish a museum in Ceylon during the 1840s. However, it has taken three more decades for a request to be made to Governor Sir William Henry Gregory explaining the need for a museum. In 1872, a scheme for a public museum was put forward, and in 1873 it was passed by the Legislative Council, authorizing the establishment of a museum ‘to be devoted to the illustration of the Archaeology, Natural History and products of Ceylon and to the collection of a library of books of general information, etc.’. Ultimately, the museum tradition in Sri Lanka was started by the colonial rulers in the 19th century with the experience they had in the west during the 18th century renaissance of collections.

The Colombo Museum was set-up under the Museums Ordinance No. 11 of 1873 and James G. Smither, eminent chief architect of the Public Works Department, designed the museum building in an Italian architectural style allowing self through ventilation for a tropical climate and construction was carried out by the Muslim mason Wapchie Marikar together with the Sinhalese carpenter, S. M. Perera and the Colombo Museum became one of the finest architectural structures in 19th century colonial Southeast Asia, as a legacy of colonial historiography.

Both, the mason and the carpenter were highly respected for their dedication during the construction of the museum and special requests were honoured by Sir Gregory at the time of opening the museum for the public in 1877. The founder, Sir William Henry Gregory, at the inception, had two main objectives in the display of the Colombo Museum: leisure and education.

The Colombo Museum was one among the many museums which were established throughout the South Asian countries during British occupation.

Since then, the Colombo museum has taken various steps to display the cultural and natural heritage of the country, and several expansions have taken place from time to time, with extensions like the East, West, and North wings. In 1942 the 2nd colonial museum, the Kandy Museum, was established for public view in an ancient building belonging to the Kandyan Royal Palace Complex, known as Palle Vahala.

In 1942, the Colombo and Kandy Museums, established in 1877 and 1942 respectively, were re-designated as the Colombo National Museum and the Kandy National Museum by a Treaty that was declared in conformity of the National Museum Ordinance No. 31 of 1942 which provided for legal sanctioning of the collection, preservation and exhibition of objects with scientific, historic and artistic interest, and to mange libraries and documents.

Most of the museums in Sri Lanka are established and managed by public institutions and there are only a few private museums in the country. Major public museums in the country are under the auspices of three main governmental bodies: the Department of National Museums, the Department of Archaeological Survey of Sri Lanka and the Central Cultural Fund Sri Lanka. Other museums and private collections are administered by different authorities, such as universities, companies, government institutions, provincial councils, district authorities and private owners.

Most of these museums largely conform to their owners’ perspectives, positions or purposes, rather than to accepted norms. However, their activities cannot be controlled or inhibited because the word ‘museum’ is not legally protected. This article mainly focuses on the museums administered by the three public institutions because those are managed by public funds and they have an obligation to serve the public.

Currently, 27 public museums in the country are managed by the Department of Archaeological Survey of Sri Lanka in various parts of the country. According to the Department, ten of 27, namely, the Anuradhapura, Panduvasnuwara, Kandy, Dighavapi (Ampara), Kotte, Matara Star-Fort, Jaffna, Vavuniya, Buduruwagala and Dedigama museums are regarded as regional museums.

The Central Cultural Fund (CCF) of Sri Lanka was established in 1980, to preserve and protect archaeologically and culturally important sites and monuments in the Triangle area, i.e. Kandy, Anuradhapura and Polonnaruwa (earlier – the Cultural Triangle), under the aegis of UNESCO. Seven museums, most of them functioning as site or project museums, are managed by the CCF; Kataragama, Maritime Archaeology Galle, Jetavanaya, Abhayagiriya, Sigiriya, Polonnaruwa and Dambulla.

Even though the first museum has been established in Sri Lanka 140 years ago, it seems still many of Sri Lanka’s museums are merely exhibition halls because they neither cater to visitors’ requirements nor practise the accepted contemporary museum norms. In future, this is what Sri Lanka’s museums need to work towards, allowing more visitor freedom, while remaining compliant with the regulatory framework because still a very large proportion of the population in a developing country like Sri Lanka has to gain the confidence to cross the museum barrier and so experience museums as user-friendly institutions.

As the UNESCO Director General identified in 2002, which is still true that ‘no formal training program in Museology yet exists in Sri Lanka…This has limited the number of trained professionals available to work in the country’s institutions. It has also limited the availability of information and expertise in the field of Museology’. Even though ‘Museology is an academic discipline with the regular university graduate study programs in many countries’, the teaching of Museum Studies or Museology in the curriculum of most universities in the country is yet to be developed. Therefore, it is imperative to have museum professionals and staff with internationally acceptable levels of training and ability to lead all aspects of museum-related disciplines in the country.

The lack of knowledgeable staff, which was a problem pertaining only in the eighteenth and nineteenth centuries in Europe, is still a problem in the Sri Lankan museums in the 21st century.

The International Council of Museums (ICOM) defines a museum as an institution for the collection, preservation, interpretation and display of objects on a regular basis, especially for educational or aesthetic purposes. For this, museums traditionally consist of a mix of objects, labels, images, dummies and recreated scenes that are intentionally arranged in a particular way for the purpose of imbuing some past story with sense of order, coherence and truth.

Hence, contemporary Sri Lankan museums should have a tendency to change from their current colonial type repository function towards an institution with more cultural, social and educational characteristics. Their activities should be expanded to serve the society by means of displaying society’s socio-cultural identity and cultural coherence towards national harmony and sustainable development in the country. However, according to the National Museum Ordinance in Sri Lanka, the Director of National Museums has the authority and power to purchase, exchange, dispose of or lend objects.

This vested power can be used to enhance exhibition quality by incorporating, changing or removing any object in museums under the department, and by arranging museums according to a national agenda. Even though there are many exciting objects in other regional national museums in the country, people rarely visit them, because the Colombo National Museum is the most important museum and currently presents the most important and comprehensive object collection.

Hence, it is better to have the principal object collection in one museum: in the National Museum. Government funds all the national museums, and therefore it is imperative to maintain at least one representative museum for the public, as a national treasure.

Moreover, there are several so called “National Museums” in the country and, I believe, this is the time to restructure the national museums. With the emergence of the field of New Museology, there is a tendency to represent and communicate with various communities through displayed objects in museums.

Hence, those museums are sub-standard national museums and I argue that there is no need to have sub-standard museums with the title ‘national’ in several cities in this small island. In this regard, we can learn a lesson from India. Our giant neighbour, has only one national museum, the National Museum New Delhi. Even the Indian Museum Kolkata, which was established before the Colombo Museum and has a comprehensive collection in the display, and other massive museums like thePrince of Wales Museum in Mumbai and Salar Jung Museum in Hyderabad are not designated as national museums, for example.

I suggest those so called national museums should be upgraded to fully pledge ‘regional heritage museums’ by improving their regional object collection and display, by using modern techniques.

Addressing some of the issues that were discussed earlier, together with the enhancement of the display and adhering to the museum marketing strategies, the Colombo National Museum could become the typical museum in the country to serve local as well as foreign visitors. Then it may be possible to keep the current name because there will be no more national museums with city names, or may go beyond to rename it as the ‘the National Museum of Sri Lanka’ which will become more appropriate.

Apart from the museums of the Department of National Museums, other major public museums which also are managed by the public funds, namely Department of Archaeology and the Central Cultural Fund, have no clear-cut legal designations.

I suggest that it would be better for all the public funded museums in this small country be administered by one public authority, hopefully superior to the Department of National Museums, to improve their quality, rationality and usability. Otherwise, no one can prevent the establishment of multiple similar irrational museums all over the country haphazardly.