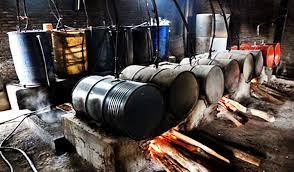 In a strict responsive measure, the Chief of Excise has ordered a spree of detections to be conducted countrywide in the coming weeks, to address the mushrooming illicit liquor industry that thrived during the recent Covid lockdowns.

Excise Commissioner General (ECG) M. J. Gunasiri has ordered all his senior officials including the Commissioners, Deputy and Assistant Commissioners heading countrywide divisions and ranges to commence a spree of detections.

Departmental Spokesman Commissioner Kapila Kumarasinghe told the Daily Mirror that explicit instructions had been given by the ECG to commence multiple detections during the span of November to December to tackle this growing issue.

He said the illicit liquor industry was mushrooming countrywide during the recent Covid lockdowns of six to eight weeks as the sale or availability of state approved alcoholic beverages did not exist like any other non-essential goods.

As a result, various interested parties or individuals have tried to cater to the growing demand of the consumers by brewing illicit liquor in every nook and corner.

The department during the weekend had conducted over 520 detections of which 391 suspects were arrested for sale and production of Kasippu or illicit liquor.