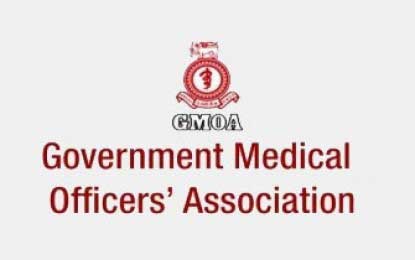 Following a lengthy discussion by the Government Medical Officers’ Association (GMOA) central committee, it was decided to launch an island-wide four-hour token strike next Wednesday (13), until the currently published effective date of the 2022 Annual Transfer List is updated.

Accordingly, the token strike is scheduled from 8.00 am to 12.00 noon next Wednesday and it is also decided not to apply for transfers as a trade union until the effective date of the annual transfer list is updated.

Unfortunately, these transfers continue to be delayed due to the Health Ministry officials who are in the habit of delaying assignments, the GMOA said.

“Correspondence between the Public Service Commission and the Health Ministry seeking repeated clarifications on matters laid out in the written law and circulars. As a result, the stability of the health service is at the risk of collapse, and the closure of peripheral hospitals,” they said.

The Central Committee that met today also observed that these delays began in early 2016 from the time of the former Director of Medical Services.

The preparation and implementation of annual transfer lists has been delayed for nearly a year since 2016. The publication of transfer lists of specialist doctors and graded doctors for the year 2021 due to be announced in November 2020, but was delayed by eight months.

The transfer list of relevant doctors for the year 2022 is being prepared arbitrarily by the Health Ministry officials without the consent of the Transfer Board.

Also, the recruitment of the next group of doctors who will have to undergo internship training after completing their internship on October 19, 2021 is also being delayed. Due to this, the process of giving post internship appointments is also delayed.

Although these issues have been brought to the notice of the relevant officials, including the Health Ministry Secretary on numerous occasions, the attempts proved to have been futile.

The authorities who call themselves efficient at the Health Ministry should take full responsibility for the precarious situation of the health services and the inconvenience caused to the public due to this trade union action.

Therefore, the GMOA requests the Health Minister to take immediate action to resolve this issue related to transfers to medical professionals and appointments.